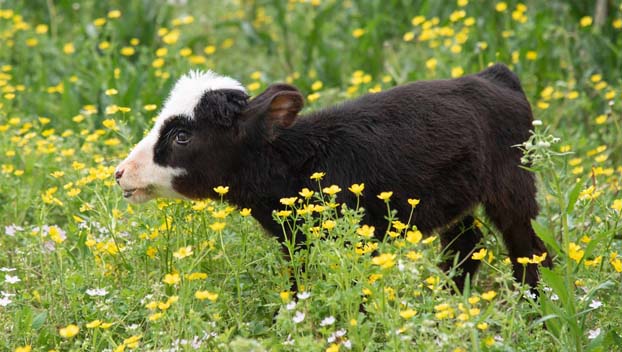 A diminutive calf whose birth in Mississippi last fall was against all odds has stolen the hearts of thousands as he grows and strengthens by the day.

Believed to be the worlds smallest bull, Lil’ Bill was born Oct. 27, weighing only 7 pounds and 14 ounces. An average calf weights 63 pounds at birth.

Born premature and underdeveloped, Bill is a fighter who was adopted by the animal experts at the Mississippi State University College of Veterinary Medicine after his owner brought him to the school for help. Vet school personnel have nursed Bill over last six months.

“Our friend now weighs about 45 pounds,” the school posted on social media last week. “We’re still gradually introducing grass into his diet, but as far as he’s concerned nothing beats a bottle of milk! He loves his time outside and shows us by running and bucking.”

“To be honest, it’s a wonder he survived at all,” said Dr. Gretchen Grissett, the university’s bovine expert who has been Lil’ Bill’s attending vet since he arrive. She estimates that Lil’ Bill was born at least four weeks premature and may suffer from a form of bovine dwarfism.

Did someone say they wanted video of #LilBill? Here’s our tiny bull bucking around and looking for pets at our last photoshoot! #hailstate #weringtrue #vetmed