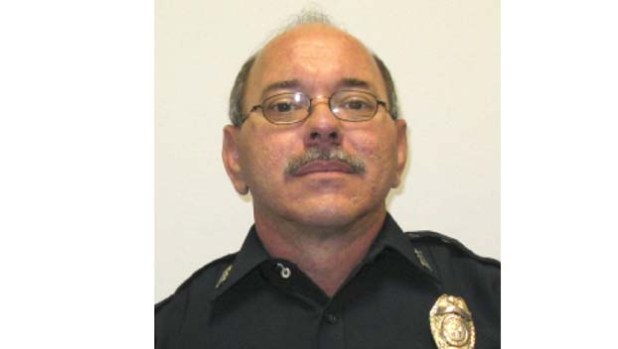 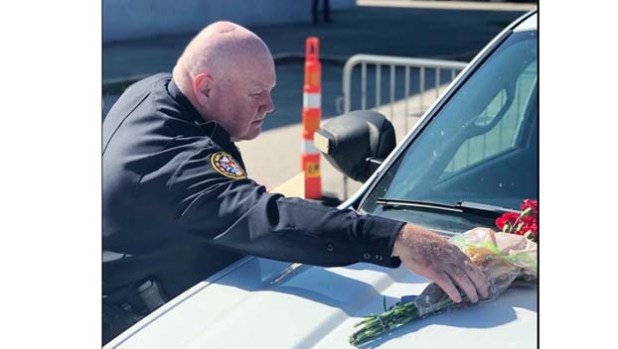 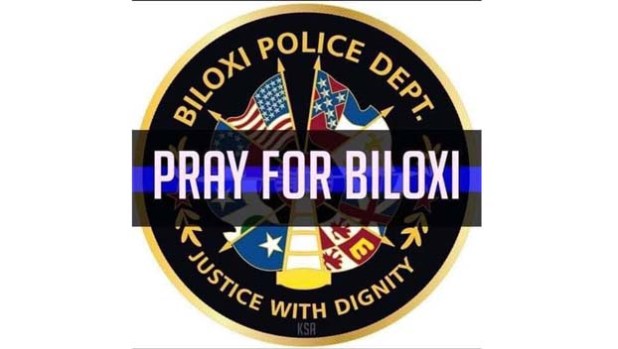 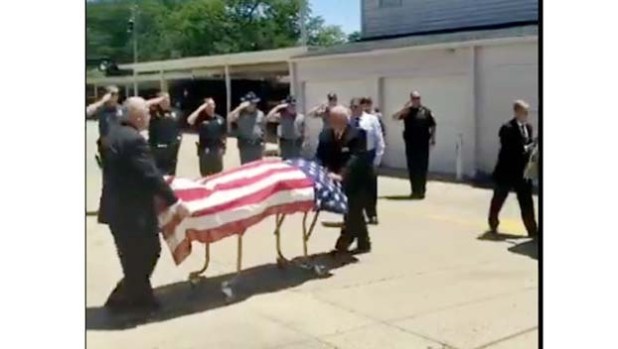 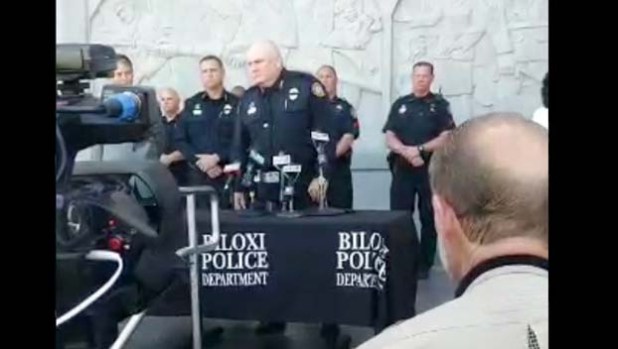 A major manhunt continued Monday afternoon for a suspect who gunned down a veteran Biloxi police officer Sunday night in the parking lot of the police station.

Officers with multiple law enforcement agencies were searching in multiple locations for the suspect.

It’s unclear what prompted the killing of Officer Robert McKeithen, a 23-year veteran of the Biloxi police department who had been scheduled to retire this year. Biloxi Police Chief John Miller said police don’t know if he was targeted, or the victim of a random act.

“The animal that did this is still on the run,” Miller told reporters Monday morning. “We’re going to do everything within our power to bring him to justice for Robert and his family.”

Authorities say the man approached McKeithen in the station’s parking lot on Sunday night and shot him multiple times, either before or after coming inside the station.

Authorities released images taken from a surveillance camera inside the station, showing a suspect wearing navy blue shorts, a black T-shirt, a red beanie cap and dark high-top sneakers. Miller said the man came inside “at one point,” and “seemed a bit nonchalant” as he walked around.

Authorities withheld details of the shooting itself, but Miller said that “with all of Robert’s training, I don’t know that there was anything else he could have done.”

McKeithen was rushed to a nearby hospital emergency room, where he was pronounced dead.

Within two minutes, other officers set up “a pretty intense perimeter,” but the gunman remained at large hours later, Miller said.

Officials pleaded for the public to identify the suspect, saying a $5,000 award is being offered.

The news conference was held on the steps of Biloxi’s police headquarters, and Miller gestured at one point toward the crime scene, around McKeithen’s patrol SUV. He said his officer was “murdered last night right here in our parking lot.”

Miller turned the case over to the neighboring Gulfport Police Department, saying it’s better to have an outside agency investigate the killing of one of Biloxi’s officers.

“Everyone is concerned,” Papania said. “Anytime you have this kind of a deliberate and violent attack on a police officer, especially right in front of a police station, it should cause everybody great concern.”

Miller said he believes the man is still in the area, but says he has no information to support that.

McKeithen, 58, was described as an Air Force veteran with a wife, daughter, two stepsons and a stepdaughter.

Miller said he and McKeithen had handled calls together earlier in their career. The chief said McKeithen and three other officers were awarded a medal of valor for risking their lives to rescue four special needs children during 2005’s Hurricane Katrina.

“He was a very gentle man for a policeman,” Miller said. “He treated people with respect and dignity and we’re going to miss him sorely.”