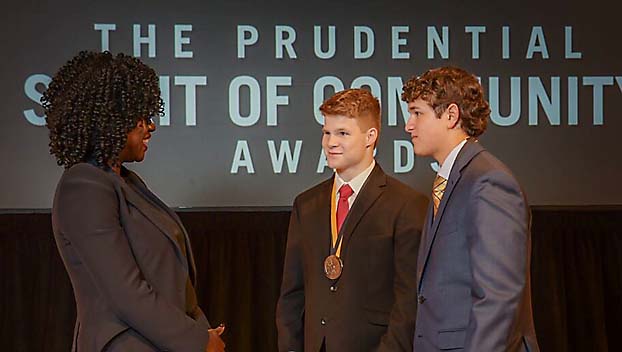 Award-winning actress Viola Davis congratulates Joseph Voynik, 17, of Flowood (center) and Keegan Figueroa, 14, of Mooreville (right) on being named Mississippi's top two youth volunteers for 2019 by The Prudential Spirit of Community Awards. Joseph and Keegan were honored at a ceremony on Sunday, May 5 at the Smithsonian's National Museum of Natural History, where they each received a $1,000 award.

Joseph Voynik, 17, of Flowood, Mississippi, was named one of America’s top 10 youth volunteers of 2019 today by The Prudential Spirit of Community Awards during the program’s 24th annual national award ceremony at Union Station’s East Hall. Selected from a field of more than 29,000 youth volunteers from across the country, Joseph has earned the title of National Honoree, along with a personal award of $5,000, an engraved gold medallion, a crystal trophy for his school, and a $5,000 grant from The Prudential Foundation for a nonprofit charitable organization of his choice.

Also honored this week in Washington, D.C., was Keegan Figueroa, 14, of Mooreville. Joseph and Keegan were named Mississippi’s top youth volunteers in February, and were officially recognized last night at the Smithsonian’s National Museum of Natural History along with the top two youth volunteers in each other state and the District of Columbia. At that event, each of the 102 State Honorees for 2019 received $1,000 awards as well as personal congratulations from award-winning actress Viola Davis. The honorees each also received engraved silver medallions and all-expense-paid trips with a parent to Washington, D.C., for this week’s recognition events.

Joseph, a senior at Jackson Preparatory School, worked for four years and raised more than $600,000 to construct a fully accessible baseball field so that children with disabilities could experience the joy of playing America’s national pastime. Joseph has always been aware of the obstacles faced by people with disabilities; when his mother was in high school, a car accident paralyzed her from the waist down. “I noticed that people with disabilities often do not have the same opportunities as the able-bodied,” Joseph said. While watching a major league baseball game on TV in 2014, he saw a commercial about the Miracle League. “It was the first time I had ever seen children with disabilities experience the joy and excitement of playing baseball on an accessible field,” he said. Joseph immediately wanted to get involved, but soon discovered that there was not a single fully accessible field in Mississippi for players with disabilities. So he decided he would build one.

Joseph first shared his idea with classmates at school, who helped organize a one-mile run that raised $10,000 for his cause. With his parents’ help, he established the Miracle League of Central Mississippi, a 501(c)(3) nonprofit, and then persuaded a neighboring town to provide a site. Over the next few years, Joseph solicited donations from businesses and foundations and promoted his project via a website and social media. After raising hundreds of thousands of dollars, he helped plan and oversee the construction of the field itself, with a rubberized surface and wheelchair-accessible dugouts. Mississippi’s first Miracle League baseball field opened on April 20, 2018, and hosted six teams in its first season. “I believe this field and league of players has opened the hearts and eyes of many in the community to see all that these disabled players can accomplish when given the opportunity,” said Joseph.

Keegan, an eighth-grader at Mooreville Middle School, helped collect almost 30,000 pounds of basic necessities and deliver them to Puerto Rico a month after Hurricane Maria devastated the island. Keegan’s father was born in Puerto Rico and lived there until he was 16. “Most of his family still lives there,” said Keegan, who has visited the island several times. “When the hurricane hit, I was terrified,” he said. “I instantly knew that I wanted to help.” As in many disaster situations, it took several days for Keegan’s family to make contact with relatives there. Thankfully, they were all safe, he said, but many had lost almost everything, and they had no access to water or electricity.

To help the family’s efforts in delivering supplies to Puerto Rico, Keegan decided to get students at his school involved in the cause. He posted flyers and posters that explained what items were needed and placed donation boxes at every entrance to the school. Keegan and his family also solicited help from churches, clubs and organizations, as well as local businesses. After donations such as medicine, hygiene products, diapers, baby formula, batteries and generators were stored in the Figueroa garage, Keegan organized a group of 20 friends to come and pack items into boxes. Once Keegan and his father arrived in Puerto Rico, they began distributing the donations to people in need. While on the island, Keegan also worked with the National Guard to deliver care packages, purify water and start rebuilding houses. “The smiles and gratitude on the people’s faces was worth all the troubles and hardships it took,” said Keegan.

The Prudential Spirit of Community Awards is a national youth recognition program sponsored by Prudential Financial in partnership with the National Association of Secondary School Principals (NASSP).

“We’re impressed and inspired by the way these honorees have identified problems facing their communities and stepped up to the challenge to make a difference,” said Charles Lowrey, chairman and CEO of Prudential Financial, Inc. “It’s a privilege to celebrate their leadership and compassion, and we look forward to seeing the great things they accomplish in the future.”

“These students have not only done important work in support of people in need – they’ve also shown their peers that young people can, and do, create meaningful change,” said Christine Handy, president of NASSP. “We commend each of these young volunteers for all they’ve contributed to their communities.”