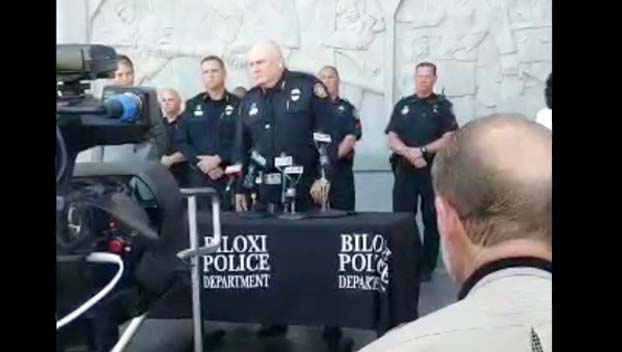 The Biloxi Police officer who was killed overnight in a shooting outside the police station has been identified as an aggressive hunt continues for his suspect killer.

Officer Robert McKeithen was gunned down late Sunday night in the parking lot of the Lopez Quave Public Safety Center on Porter Avenue in Biloxi. Police are still seeking to locate the suspect.

McKeithen was a 24-year veteran with Biloxi’s Police Department and was set to retire later this year.

Gulfport Police are leading the investigation. Police report McKeithen was shot multiple times outside the police station and was quickly rushed by Biloxi Fire Department personnel to nearby Merit Health hospital where McKeithen was pronounced dead.

The suspect fled on foot and is the subject of an intense manhunt. Investigators have released a security camera image of the man, but have not released his name.

The suspect was seen in the photo as wearing a black T-shirt, navy blue shorts, a red beanie cap and dark-colored, high-top sneakers. He was slender in build and was between 5-feet, 7-inches and 5-feet, 10-inches in height, police report.