Mississippi’s oldest serving priest ready for retirement, but plans to continue to serve 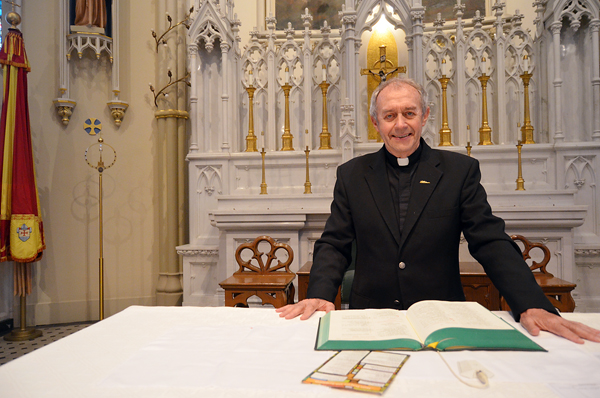 After leading the local Catholic congregation for more than two decades, the Rev. David O’Connor said he will retire at the end of June.

O’Connor announced his retirement to the staffs of St. Mary Basilica and Assumption Catholic Church and church members Monday.

“My last official day will be June 30,” O’Connor said.

O’Connor had hoped to retire later in the year or early next year, he said, but is retiring now because the Jackson diocese is making a series of changes with pastor assignments, including adding a couple of newly ordained priests.

“I could have retired six or seven years ago. I enjoy the buzz,” O’Connor said. “I am by far the oldest serving member in the diocese —easily, by a long shot.”

The retirement age for priests in the Catholic Church is 70 years old. O’Connor said he is several years older than that.

O’Connor said the Rev. Scott Thomas, a priest currently serving in Clarksdale, has been named to replace O’Connor in July. Thomas is a native of Jackson and a graduate of St. Joseph Catholic School.

O’Connor first came to Natchez 33 years ago and led the parish for six years. He returned 11 years later and served another 16 years.

“I have spent half of my working life here in Natchez,” O’Connor said.

Monday’s retirement announcement with his staff made for an emotional day, O’Connor said.

“It was overwhelming, very tough. A few tears were shed,” O’Connor said.

Because of a planned vacation and trip to Ireland at the end of June, O’Connor said his last Sunday service will be June 23. During the trip, O’Connor will lead a tour group — including approximately 40 people for Natchez — to Ireland, Northern Ireland, Scotland and parts of England.

When he returns, O’Connor said he doesn’t plan to leave Natchez until the beginning of next year. Through the fall, O’Connor said he would be sorting through his 45 years worth of books, files and other documents.

“There will probably be a publication down the road — not sure what it will look like,” O’Connor said. “I will be in town through the fall of the year. I will still sip a little coffee with the boys and girls at the coffee shop, attend Wednesday night dinners and the fall football games.”

O’Connor said he plans to then move to Greenwood, where he worked for approximately eight years.

“I have served on the board and did a little fundraising for a new retreat center there over the past four or five years,” O’Connor said.

In Greenwood, O’Connor said he would continue to be active, providing leadership consultation and other services.

“I will stay busy in the diocese, but mostly on my scorecard,” O’Connor said.

The biggest challenge about retiring, O’Connor said, will be the absence of the many people he has worked and worshipped with for so many years.

“My biggest thing will be breaking from people who have in a sense been my extended family, for many, many moons,” O’Connor said.

Coming to Mississippi right out of seminary in 1963, O’Connor said he has spent most of his adult life in Mississippi. He plans to spend some of his retirement back in Ireland, O’Connor said, but cannot imagine leaving the state entirely.

“This has very easily become home for me,” O’Connor said.

Man who admitted guilt in starved dogs case to…