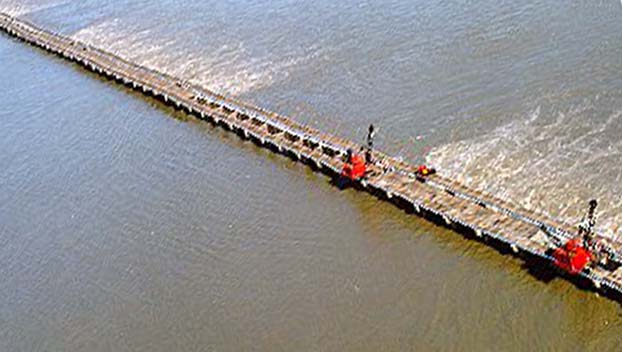 Torrential rains in Louisiana brought such a rapid rise on the Mississippi River that the Army Corps of Engineers is opening a major spillway four days earlier than planned.

The Mississippi River had risen 6 inches in 24 hours, with more rain expected through the weekend, spokesman Ricky Boyett said Friday.

A stalled frontal system is bringing daily waves of showers and thunderstorms through the weekend, said Michael Hill, a National Weather Service meteorologist. “We just have to watch every 12 to 24 hours for another round of storms, possibly with heavy rainfall … until this frontal boundary pushes off,” he said.

Boyette said the corps planned to open 40 to 50 of the 350 bays on the Bonnet Carré Spillway, 28 miles above New Orleans, to relieve stress on New Orleans levees. The water is diverted along a 6-mile (9.7-kilometer) course of guide levees to Lake Pontchartrain, after which it flows to the Mississippi Sound in the Gulf of Mexico.

Never before has the spillway been opened twice in one year.

The second opening comes just less than a month after the April 11 closure. It had been opened unusually early, in February.

Each bay is closed with 20 huge timbers, which must be raised and set atop the 1.5-mile-long concrete structure by huge cranes on tracks.

“The biggest challenge we have is we’re unable to operate the cranes in high wind or in lightning,” Boyett said Friday. “It’s hard to say how long it’s going to take, based on the weather conditions. But they will be opened today.”

The levees at New Orleans were built to handle up to 1.25 million cubic feet of water per second flowing past — enough to fill the Empire State Building in 30 seconds. Federal law requires opening the spillway when that mark is reached, Boyett said at a news conference Thursday.

“The risks in not operating the spillway as it is designed … would be potentially catastrophic,” he said.

Graschel said rivers around Louisiana are at flood stage but held back by levees.

Backwater flooding is likely as waterways that flow into those rivers meet high water, he said, as is flash flooding.

At New Orleans, the spillway will keep the crest at about 17 feet.

The Mississippi will crest above that about May 22 or 23, as a rise works its way down from Arkansas City, Arkansas, Graschel said.

Corps prepares for ‘an unprecedented amount of water’ headed…