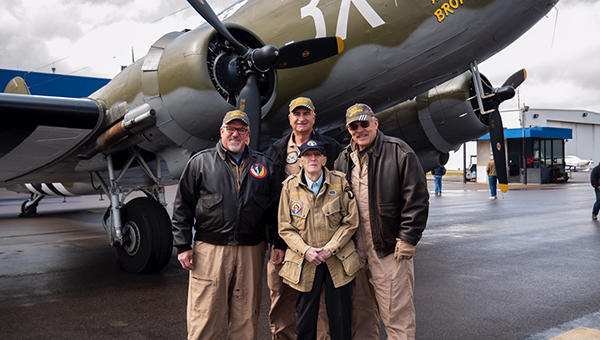 Dan Fordice is flying to England with a piece of history.

The plane will take part with 26 other transports in a paratrooper drop over Normandy, France, commemorating the 75th anniversary of D-Day.

Fordice was named to the team of pilots because of his involvement with the CAF and is a sponsor of the aircraft.

“This particular plane is probably the most historic plane in all of World War II,” Fordice said.

“During the 5th and 6th of June, the American Army Air Force and the British launched 800 C-47s to drop 13,000 paratroopers from the 82nd and 101st airborne divisions behind enemy lines to keep the Germans from being able to come reinforce the coastline.

The plane also dropped paratroopers for Operation Market Garden in World War II, and participated in the Berlin Airlift from Jun 24, 1948 to May 12, 1949.

He said the Commemorative Air Force found “That’s All … Brother” about five years ago in Oshkosh, Wisc., “And were just amazed that this airplane was still out there. We were able to acquire the airplane and do a refurbish like no other. It’s nicest C-47 out there in the world, probably.

“I’ve been extremely fortunate to be on the team flying it over the Atlantic. We’re taking four pilots and a crew chief.”

The plans left Tuesday for England from Oxford, Conn., with 15 other C-47s. The planes, Fordice said, will do a 15-ship formation over New York City on the way to Goose Bay, Canada.

From Canada, the flight goes to Narsaq, Greenland, Reykjavík, Iceland, and then to Prestwick Scotland before landing in Duxford, England.

“The airplane is going to be over there about six weeks,” Fordice said, adding he will not be flying in the D-Day program. He said one D-Day veteran, Jim “PeeWee” Martin, 97, a member of the 101st Airborne who landed in France on D-Day, was expected to jump, but will not because of illness.

He said the plane was found at the Basler Co. in Oshkosh. The company cuts planes like C-47s in half, adds 50 inches to the fuselage and adds turbine engines to convert the plane to a heavy hauler.

“You can’t buy an airplane (like the C-47) for any money that can pickup and operate off rough terrain and short runways as well as this airplane can,” Fordice said.

Luckily, he said, “That’s All … Brother” was in worse shape than some of the other planes, “So they just kept passing over it and waiting until they didn’t have any more airframes before they used this one.

“It was in pretty bad shape. It had a lot of corrosion and hadn’t been taken care of over the years. It is in beautiful condition today.”