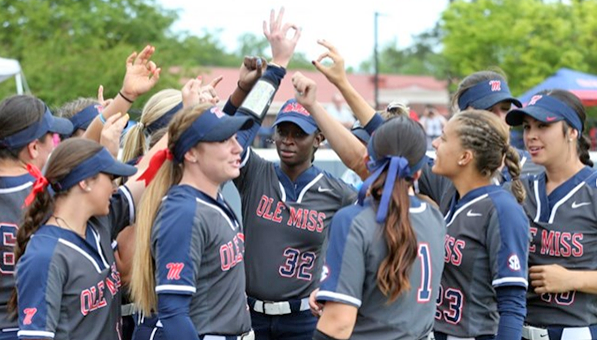 OXFORD — For just the second time in its history, the Ole Miss softball team will host an NCAA Tournament regional.

No one, it seemed, was more surprised about that than the Rebels themselves.

Ole Miss (37-17) earned the No. 11 national seed for the 64-team tournament when the bracket was released Sunday night. Coach Mike Smith thought his team had a chance to host, but was shocked that it was seeded that high.

“I was very surprised at 11. I thought we’d be somewhere around 14, 15, 16 or maybe sneak in at 13. But 11 surprised me,” Smith said. “They took our body of work and took our strength of schedule, which I think was five or six, and that was big … I think our body of work proved that we deserved a seed.”

There were certainly questions, too, if Ole Miss would get that much sought-after final home series. The Rebels have lost five of their last six games, including being swept in a series at Georgia where just one win could have locked them into a bye in the SEC Tournament.

They then beat Mississippi State in their SEC Tournament opener before losing 8-0 to Kentucky in the quarterfinals.

“We had our bags packed in our minds,” said senior outfielder Kylan Becker. “Just the opportunity to finally unpack our suitcases and be at home and sleep in our own beds is so exciting.”

As a program, it’s only the second time Ole Miss has hosted an NCAA regional. The first was in 2017, when a hot run late in the season culminated with the SEC tournament championship.

Coming to Oxford for this year’s regional will be No. 2 seed Louisiana-Lafayette (50-4), the Sun Belt Conference champion; three-seed Southeast Missouri State (45-16); and four-seed Chattanooga (35-15).

It’s not the easiest grouping of teams by any means, specifically looking at that two seed that won 50 games and went undefeated in conference play.

Ole Miss will play Chattanooga in its regional opener Friday at 6 p.m. Louisiana-Lafayette and Southeast Missouri State play at 3:30 p.m.

“We’ve got a tough region. It’s tough. Southeast Missouri has a really good pitcher and they have some good bats. Lafayette can swing it a little bit,” Smith said. “It’s going to be a good regional. I think it’ll be pretty similar to the one the last time we hosted here.”

For the SEC as a whole, it’s the third straight year all 13 schools were placed in the NCAA Tournament. Six, including Ole Miss, will host regionals. SEC tournament champion Florida, Alabama, LSU, Tennessee and Kentucky were also picked to host.

Mississippi State is making its 15th NCAA Tournament appearance in 19 seasons. MSU has won at least one regional game in four of its last five regional appearances, but has never been to the super regional round.

Mississippi State has never played Seattle, which is also making its first NCAA Tournament appearance. The Bulldogs played and lost to Washington, 7-5, in a tournament in Mexico in February.

MSU’s last meeting with Fordham was in the 2017 NCAA Tournament. Fordham won that game 2-1.

LSU (40-16) is a national seed for the fifth consecutive season. It has 14 wins over Top 25 RPI teams this season.

Louisiana Tech won the Conference USA tournament championship, just two weeks after a tornado heavily damaged its home stadium in Ruston. It also won the league’s regular season title. The Lady Techsters are in the NCAA Tournament for the second time in three seasons.

“I’m just incredibly proud of this team and these ladies have accomplished,” Louisiana Tech coach Mark Montgomery said. “We’ve been to Baton Rouge and experienced Tiger Park a number of times the past few years so it will be a familiar venue for us. We have a senior-led team that won’t be afraid of the stage.”