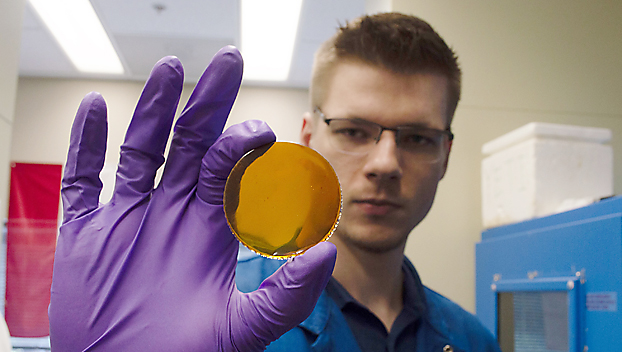 University of Southern Mississippi polymer science doctoral student Witold Fuchs displays the carbon-fiber composite he has created that is scheduled for transport to the International Space Station as part of a collaboration with NASA. (Photo by J'Marcus Alfred)

Try to imagine high-performance materials created in a lab at The University of Southern Mississippi (USM) bound for the International Space Station. Seem far-fetched? Think again.

Witold Fuchs, a third-year polymer science doctoral student at USM, has spent the past year collaborating with NASA on the design of a carbon fiber composite that is slotted for testing as a potential hull for spaceships and satellites. If all goes as planned, the new materials will be launched into space within the next two weeks.

Fuchs and his team have been conducting experiments under the tutelage of Dr. Jeff Wiggins, director of USM’s School of Polymer Science and Engineering. The backbone of Fuchs’ research is to develop a lightweight, cost-effective material that can withstand the atmospheric rigors of outer space.

“Spaceships like the International Space Station, space shuttles and satellites are composed primarily of metal, which is quite heavy and, therefore, expensive to launch,” said Fuchs. “The cost associated with metal is primarily due to its weight – requiring more fuel for launch. Naturally, it would be in NASA’s best interests to find an alternative to metal that would make it less costly to launch and to maintain space ships. Our focus has been to develop a material that could replace the metal hulls of these spaceships.”

When asked if he considered the research to be ground-breaking, Fuchs grinned and offered a modest take on his efforts. “I think I am in a bit of denial right now,” he said. “There has been so much hard work and testing and anxiety involved with this project. It is a bit overwhelming to think that my research will be tested aboard the International Space Station. I am very eager to see what the results will show.”

The International Space Station (ISS) is a space station, or a habitable artificial satellite, in low Earth orbit (approximately 240 miles above the Earth’s surface). Its first component was launched into orbit in 1998, with the first long-term residents arriving in November 2000. It has been inhabited continuously since that date.

Inside his laboratory at USM’s Thames Polymer Science Research Center, Fuchs displays the fruits of his intense labor – a wafer-like material similar in size and appearance to a Reese’s Peanut Butter Cup. He notes that smaller samples of the composite will be attached to the exterior of the space station for testing.

The materials are scheduled to remain in space for at least one year and possibly as long as two. The fundamental objective is to determine whether or not the materials suffer any degree of degradation while in space.

The process that took Fuchs’ carbon-fiber composite from the concept stage to a refined, finished product required extensive testing and exhaustive hours in the lab. Fuchs estimates that he spent more than 1,500 hours on the project during the most recent academic year (fall 2018 until spring 2019).

To start, a suitable base material is identified – one with phenylphosphine oxide (PPO) portion readily available for synthetic modification. At that point, he outlines the full synthesis from start to finish, while stocking up on the necessary materials.

With the PPO material in hand, he is not quite ready to begin testing. He mixes an appropriate amount of the material with his standard epoxy/amine matrix formulation, cures it in an oven (similar to baking a cake) at 356 degrees Fahrenheit for three hours, and the result is the solid sample material. The entire process takes about three weeks.

And the hardest part of his research project?

“Wading my way through the synthesis,” said Fuchs. “Even though I have streamlined the process quite a bit to where I can now make this material fairly quickly and easily, it has been a long exercise in frustration and failure. I account my success to the support of my PI (Wiggins) and my research group, who have kept me motivated and helped me through the many puzzles and dead-ends I’ve encountered in my research.”

Fuchs is working with scientists at NASA Marshall (Huntsville, Ala.,) to prepare the materials for launch to the space station. He will spend this summer at NASA Glenn (Cleveland, Ohio) collaborating with researchers on new materials for space applications.

The current collaboration got kick-started when Fuchs served a previous internship with NASA.

“I reached out through the network I built during my first NASA internship to seek out an expert on low earth orbit degradation of materials and got connected to an individual who specializes in that kind of testing,” he said. “We discussed my dissertation project (and I found out some interesting history about PPO that I wasn’t able to access through publicly available information) and I was offered a spot on the next flight.”

Fuchs earned his undergraduate degree in biochemistry at the University of Detroit Mercy in his hometown of Detroit, Mich. A classmate suggested Fuchs consider USM’s esteemed polymer program for his doctoral studies.

Wiggins says Fuchs checks all the boxes when it comes to recruiting, retaining and heralding future scientists at the University.

“Witold exemplifies everything we are looking for in a graduate student,” said Wiggins. “He is passionate about his research and has been a great team player for us in the polymer program. His unique research and the collaboration with NASA is a testament to the reputation our University has developed as a global leader in polymer research and real-world applications.”

One might say that the sky truly is the limit for a talented researcher like Fuchs. How confident is he that the space-bound material will succeed?

“I am reasonably confident that it will succeed,” he said. “But even if it doesn’t, that will prove helpful in and of itself. Either way, we will be learning something. And that’s always exciting.”

Van Arnold is a reporter in the Office of University Communications at the University of Southern Mississippi. He can be reached at 601.266.5568 or by email to: van.arnold@usm.edu