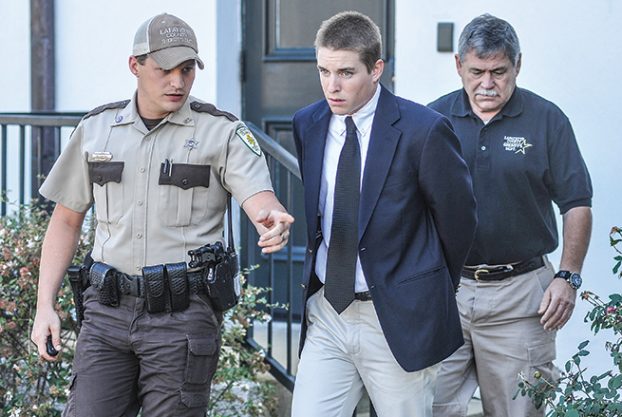 John Strickland Jr., center, leaves the Lafayette County Courthouse after pleading guilty to one count of aggravated DUI in the death of John Wheat, in Oxford, Miss. on Monday, September 23, 2013. Sarah Wheat was also killed in the wreck that took John Wheat's life, but her death was not prosecuted. Strickland received a sentence of 25 years with 13 years suspended. (Bruce Newman, Oxford Eagle)

On Tuesday, the Wheat family received news they have dreaded for nearly a year. John Strickland Jr. was released on probation, serving less than half of his 12-year sentence in the deaths of John and Sarah Wheat.

Strickland, while under the influence of prescription medication, marijuana and a canned air propellant, difluoroethane, crossed over the median into oncoming traffic on Highway 6 and crashed into the Wheat siblings’ vehicle. Sarah was pronounced dead at the scene and John died later at a Memphis hospital.

The incident occurred in 2012 and Strickland was sentenced in to 25 years in prison with 13 years suspended. He served less than six. Last May, the Wheat family was notified by the Mississippi Department of Corrections that Strickland was being considered for early released under Mississippi’s Earned Release Supervision program. The family wrote letters to MDOC requesting Strickland not be considered for release. At the time, the MDOC records had Strickland listed for a tentative release date of July 2020.

The MDOC sent an email to the family and others who wrote letters informing them Strickland would be considered for early release and thanked them for the letters of concern. Still, Strickland was released a year later.

“It is infuriating,” Andrew Wheat said in written comments provided to The Oxford Eagle newspaper. “There needs to be truth in sentencing. It is no wonder the recidivism rate is so high, people are not held accountable for their actions. A lot of friends and family came together to reach out to the Dept. of Corrections when they planned to release (Strickland) in May of 2018. We felt relief when we were told they denied his release. For them to release him early is disgraceful. It minimized the lives of John and Sarah.”

Andrew is the brother John and Sarah and spoke the EAGLE on behalf of the Wheat family.

Even though the full 12 years of Strickland’s sentence was not served, Andrew does not feel justice was remotely close to being served in the deaths of his brother and sister. He also felt very strongly about the sentencing Circuit Judge Andrew Howorth gave Strickland in 2013.

“There is no amount of prison time that can bring John and Sarah back or to justify taking their lives,” Wheat said. “However, five years does not come close to feeling like justice is served. It was insulting that Judge Howorth suspended 13 years during the sentencing hearing knowing that Strickland would only serve a small portion of the balance due to ‘earned release time.’ This was after being allowed to enter a plea deal to one count after murdering two people due to his direct actions. There is no justice. No family who lost a loved one should have to fight to keep someone in prison for the amount of time the criminal was sentenced to.”

Now, nearly seven years removed from that fateful October day in 2012, Andrew and the rest of the Wheat family are still battling with the grief over losing a brother, a sister, a daughter and a son.

“There are good days and bad days,” Andrew said. “The pain has not gone away, you just learn to live with it. I miss them everyday. We are a strong family and we will continue to keep John and Sarah’s memory alive. …We would like to thank everyone who has supported us through this tragic event. We want to thank all of the friends, family and people we have not met who wrote letters and placed calls during the sentencing and attempted early release.”