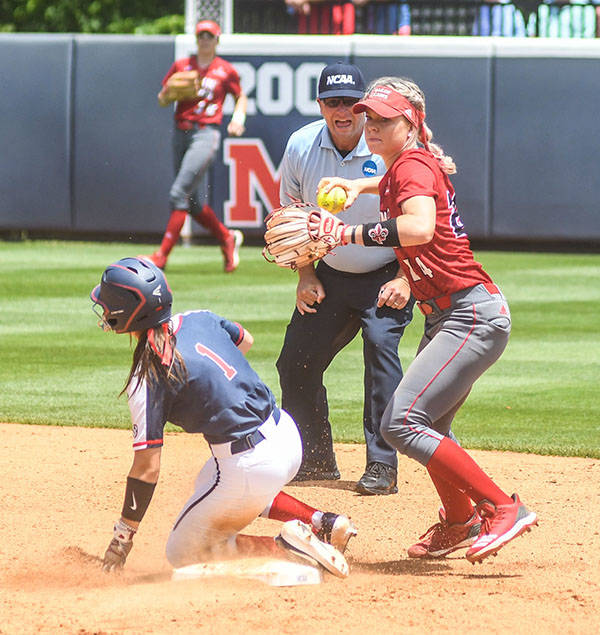 OXFORD — Ole Miss’ softball team answered a shutout with a shutout to keep its season alive.

The Rebels scored eight runs in the top of the first inning and went on to rout Southeast Missouri State 10-0 in an elimination game at the NCAA Tournament’s Oxford Regional on Saturday.

Ole Miss (39-18) advanced to Sunday’s championship round, where it will have to beat Louisiana-Lafayette (52-4) twice to move on to the super regionals.

Louisiana-Lafayette beat Ole Miss 2-0 earlier Saturday, which sent the Rebels into the do-or-die game against Southeast Missouri State. The rematch with the Ragin’ Cajuns is Sunday at 2 p.m.

“Excited that we are going to have another opportunity to play Louisiana,” Ole Miss coach Mike Smith said. “I know it was a tough loss earlier this afternoon, but we’re excited about being in Italy Blue tomorrow and getting another opportunity. We’ve got to win two. It’s not like we haven’t played a doubleheader on Sunday.”

After managing only three hits against Louisiana, the Rebels surpassed that total in the first inning against Southeast Missouri State (48-18).

Leadoff batter Kylan Becker was hit by a pitch, and Abbey Latham followed with a two-run home run over the left field wall.

The Rebels batted around and scored six more times in the first inning — Becker and Latham both had RBI singles on their second trips to the plate — to take an 8-0 lead. They added two more runs in the fourth inning and won it in five via the mercy rule.

“I challenged them to throw the first punch and keep going at (Southeast Missouri),” Smith said. “We put up an eight-spot and that really helped settle some nerves.”

Latham finished 2-for-4 with three RBIs and Becker was 2-for-3 with one RBI and a run scored. Jessica Puk scored two runs and drove in another, and Amanda Roth went 2-for-2 with two RBIs and two runs scored.

In the circle, Brittany Finney and Ava Tillman combined on the shutout. Finney allowed two hits and struck out five in three innings, while Tillman pitched two perfect innings of relief.

In three games in the regional, Ole Miss’ pitchers have only allowed 10 hits and two runs, and have racked up 22 strikeouts in 17 innings.

“(The pitching was) outstanding. They’ve given us an opportunity to win every ballgame,” Smith said. “I’m proud of what these girls have done.”