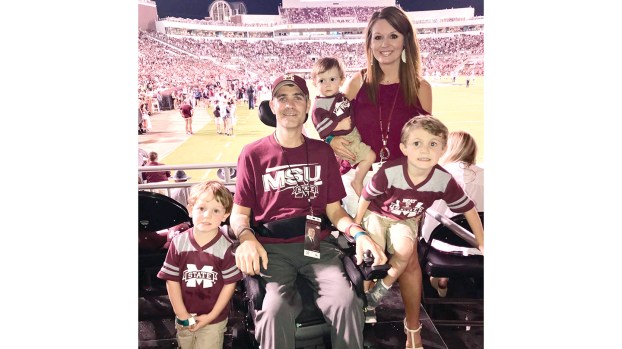 ALS left her widow, now Mississippi mom says ‘I just want people to understand how devastating it is’

ALS was the diagnosis Jenna Wall feared, but it was the reality she and her husband, Tripp, faced.

Her husband died April 24 from complications of ALS, leaving her to raise their three sons, Fisher, 5; Tucker, 4; and Porter, 2. He was 37.

May is national ALS Awareness Month and Jenna Wall is telling her husband’s story to make others aware of the disease that strikes 20,000 people yearly.

Tripp and Jenna Wall met at Copiah-Lincoln Community College in 2000 and dated for five years before marrying in September of 2006. The two were happy, grateful and enjoying parenthood with their brood of three boys.

Her husband first noticed symptoms in January of last year, but they were unsure what was wrong. Within weeks, he began to suffer weakness in his right side and foot drop, which means he was unable to raise the front part of his foot because the muscles that lift the foot were paralyzed.

That next month, Wall was diagnosed with chronic inflammatory demyelinating polyneuropathy. CIDP is a rare neurological disorder where there is inflammation of nerve roots. CIDP is another neurological disease, but there are treatment options.

“We’ll be OK,” Jenna told her husband. “We can deal with anything but ALS.”

In May, Wall was sent home from his job as an offshore cementer on medical leave. He could walk, but not very well. Working had become a safety issue.

He began using a walker to get around better, but by June he needed a wheelchair.

“Of all possible causes of these symptoms, ALS was by far the scariest,” Jenna Wall said. “We never thought that would end up being his diagnosis.”

Yet two months later, that’s what happened. Doctors changed his diagnosis from CIDP to ALS.

“He was halfway prepared, but I wasn’t,” Wall said.

He was referred by Dr. Ruth Fredericks to the Mayo Clinic in Jacksonville, Florida. Wall was diagnosed with rapidly progressive ALS on June 15, 2018. He took the two available treatments for ALS — Radicava, an infusion, and Riluzole, a pill.

By August, he had switched to a motorized wheelchair. The chair never stopped him from his duty as dad to his three sons.

“That was Fisher’s favorite thing, to ride in his daddy’s wheel chair,” Wall said.

Wall worked half days to take care of her husband. She alternated with her mother and sister, who is a nurse.

“They were there a lot, and they helped,” Wall said.

In September, he traveled to Emory University in Atlanta, Georgia, to try to get into a clinical trial. Doctors turned him down because of his decreased lung function.

After the crushing news that he wouldn’t be accepted into the clinical trial, he received a non-invasive ventilator. By December, he couldn’t breathe without it. He only took it off to shower.

By October, he was admitted to Compassus Hospice.

Time passed, and the family spent as much time as they could together, from swimming during the summer, to attending baseball and football games, and even gathering their entire family from far and wide for a weekend dove hunt, she said. When the couple celebrated their anniversary, they surprised their guests and renewed their vows.

While he was still able to, he played outside with his sons. Whether it was pitching a baseball or riding the tractor, they always had a fun time.

“One thing he struggled with was why this was happening, just when we felt like our life was perfect,” she said. “We had struggled with infertility, and it took us five years to have our first. Then, we went from infertility to having three beautiful boys in less than four years.”

Tripp Wall loved being a father.

“They had to climb in his lap and turn the pages, but he would still read to them,” Wall said.

“He was the best daddy, very hands on and always out in the yard with them, wrestling with them, pitching to them, letting them ride the tractor with him. They absolutely adored him, and they were just getting to that fun age where he could take them hunting and fishing, doing all of the things that he grew up loving. It just seemed so unfair that both he and the boys were getting cheated out of all of those father-son experiences that he was so looking forward to.”

Even while living with a death sentence, the Walls celebrated milestones and enjoyed life to its fullest. They watched their dream house they’d sketched out on graph paper become a reality. They enjoyed Thanksgiving with the family. Then Christmas. Then Easter.

He lived 10 months and one day past his doctors’ diagnosis.

It’s been three weeks and Wall said everything is still the same. Her husband’s dirty clothes are still in his hamper. The hover lift is still in their bedroom. His wheelchair and sunglasses are waiting for him where they were last.

ALS is known to mainly affect older individuals, but anyone can be diagnosed.

“I just want people to understand how devastating it is,” she said. “Even though their body is different, they’re still the same person, just paralyzed.”

ALS is a hard disease to handle, as there is no cure. Getting help is important.

“Reach out to your local ALS chapter. They have so many resources they can help you with,” Wall said. “Stay strong and hang in there.”

If you speak Mississippian, you may sound sexier than you think

Mississippi may be near the bottom of most good lists, but a recent survey says Mississippi has one very good... read more