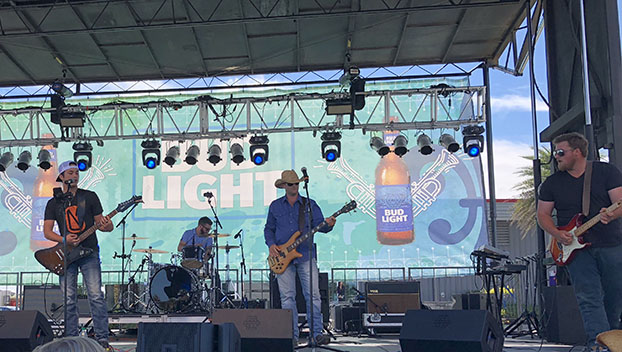 Some people were a little more emotionally involved in the decision than the average viewer, however.

Such was the case for Aaron Adair, a native of Natchez who went to Monterey High School.

Adair said he was thrilled when he saw his friend and fellow band member Laine Hardy crowned this year’s American Idol.

“We had a watch party last night in Livingston,” Adair said. “It was completely overwhelming seeing him on such a big stage. It is amazing what an unbelievable artist he has become.”

“I’ve been friends with his brother Kyle Hardy for years,” Adair said.

Laine Hardy had been on “American Idol” last season but did not make it to the final rounds.

During Laine Hardy’s first season on “American Idol,” Adair said Kyle Hardy called him to fill in for Laine on lead guitar with the country, swamp pop rock band that is made up of the two Hardy brothers, their cousin Casey Hardy on bass, Seth Cotton of Jonesville on acoustic guitar and drummer Trent Thibbeaux.

After he left “American Idol” last season, Adair said, Laine Hardy came back and played with the band for the past year, and Adair has played every show with the band since joining.

“It started out kind of slow last year when he first got out of ‘American Idol,’” Adair said. “We played some bars and a few festivals, the Washington Parish Fair and the Country Smooth Festival in New Orleans. In south Georgia, we opened for Chris Janson.”

Adair said the band touted the fact that Laine Hardy had been an “American Idol” contestant in promoting the band last year.

This year, Laine Hardy was not planning to audition for the program but instead traveled to the audition rounds to play guitar for a friend who was auditioning.

The “American Idol” judges, however, recognized Laine Hardy, encouraged him to try out for the show and gave him a golden ticket to be on the show.

The rest is history.

“I can’t imagine what kind of shows are about to come,” Adair said. “He was in LA, flew to New York to be on ‘Good Morning America.’ I’ve spoken to him a few times today. It has completely blown his mind.”

Adair said Laine Hardy has expressed an interest in returning to the band.

“As far as we know,” Adair said, “we are pretty sure we will be able to stay with him. I know ‘American Idol’ has him super busy doing interviews.”

Adair said he is excited about what the future holds.