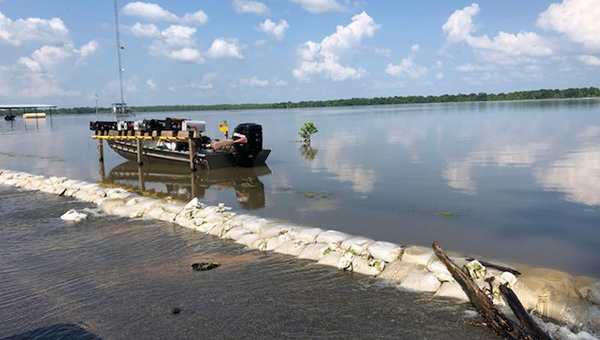 Access to Eagle Lake remains restricted to residents and those who are helping residents evacuate or further protect property. Mail delivery to the area was suspended Wednesday.

After cresting near 50 feet, the Mississippi River is expected to begin falling, a National Weather Service hydrologist said.

But the fall won’t provide immediate relief to people in the Yazoo Backwater area or the residents in the Kings community or Ford Subdivision areas, which remain flooded.

“It’s cresting right now or near crest,” said Marty Pope, hydrologist with the National Weather Service office in Jackson. “It’s going to start falling, but it’s going to be a lot slower than what we were hoping before.

“The forecast only shows a seven-tenths of a foot fall over the next five days or so, so that’s much slower than we were looking at earlier.

“It won’t help people in backwater. We’re not going to get a real substantial fall like we were hoping for, not a while, at least.”

“They’re pretty close together,” Pope said. “Any fall you get at Vicksburg could allow that thing (Steele Bayou) to be opened, but even then, it’s not going to drain out that quick. It shouldn’t be too long before they would be able to do it once the river starts in recession, but even then it’s going to be a slow drop. It will be a slow process.”

Part of the reason for the Mississippi’s slow fall, Pope said, is a five-day forecast of 5 to 7 inches of rain in the Upper Missouri River Basin, and 6 to 9 inches forecast for the Mid- to Upper Arkansas River Basin.

“The big bulk of that is going to have to come down the Arkansas eventually. When it gets down here, it will probably add to the river quite a bit. That’s the reason that our recession is going to slow down,” he said.

“It’s (the Mississippi) going to crest out,” said Peter Nimrod, chief engineer with the Mississippi Levee Board. “It’s going to take a few days and sit there, then it’s going to finally fall out, then we’ll be able to open the gates.

“I don’t know what day that will be, and it will be not much flow out of there, and then we’ll get a little drop and we’ll finally get some relief.”

He did not know how long it will take to get the water out of the backwater area.

Some of the land that’s barely underwater will come back out first, but it’s still going to take some time to get that out of here.”

When the Steele Bayou gates were briefly opened in April, Nimrod said, the backwater fell 1.7 feet in about a month and then it started rising again.

The amount of rain falling in the Delta can also affect the backwater recession.

Nimrod said, however, the weather forecast for the next week “looks good for us. The forecast is low as far as rainfall, which is a huge help, so when the gates are opened up there won’t be feeding from behind, which is what happened to us in April.

“Maybe we’ll have some luck, but some of the farm land is down below 90 feet, and it could be a really long time before it comes. It might be July before water comes off some of that land. A lot of that land is not going to be planted this year.”

Mississippi homeowner shoots reported burglar he found inside his house

Chief of accused killer cop says, ‘He needs to…