Judge recuses himself from homicide case against police officer 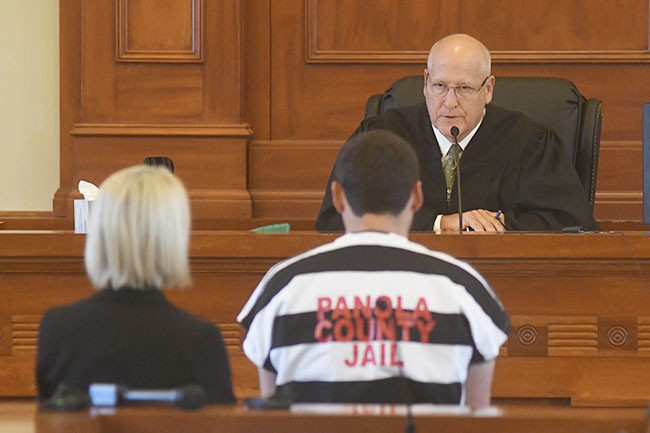 Circuit judge Andrew K. Howorth speaks to Oxford, Miss. police officer Matt Kinne, who has been charged with murder in the death of Dominique Clayton, and his attorney Tiffany Kilpatrick during a hearing at the Lafayette County Courthouse in Oxford, Miss. on Wednesday, May 22, 2019. (Bruce Newman, Oxford Eagle)

Amidst tension following Wednesday’s hearing in the death of of Dominque Clayton, Circuit Court Judge Andrew Howorth recused himself from the case.

The announcement occurred on Thursday, when Howorth signed an Order of Recusal. Members of Clayton’s family ‘requested (or made demand)’ that Howorth ‘get off this case,’ per the order.

The request was reported to the Court by the victim’s rights coordinator with the District Attorney’s Office.

“It is unusual, to say the least, that family members of crime victims (who are themselves crime victims) would seek removal of a presiding judge,” the order read. “However, when a family member is violently killed, relatives and loved ones should not necessarily be expected to behave rationally.”

During Wednesday’s initial court appearance for Matthew Kinne, who is charged with the murder of Clayton, Howorth postponed the bond hearing per the state’s request. The request was to allow time for the state to look over the case to make an appropriate bond recommendation. Both the state and Kinne’s defense counsel were in agreement with the decision to delay.

The decision to postpone a bail hearing angered members of Clayton’s family, who left the courtroom inside the Lafayette County Courthouse before the hearing adjourned. Bessie Clayton, Dominique’s mother, spoke to the media outside the courthouse voicing her displeasure with the proceedings and demanding Howorth be removed from the case.

“This is a joke. We’re going to handle this,” Clayton said. “I’m going to do something with this City. … This judge has got to go.”

In the order, Howorth referenced the family’s statements to the media and their potential effects on the future of the case if he were to stay on, which enforced his decision to recuse himself.

“Statements made to the media — whether motivated by grief, anger, fear, confusion, or ignorance — are repeated by the media. Then those statements meld their way into and through social media, where they then apparently are often considered to be facts,” Howorth said in the order. “Thereafter, public confusion or misunderstanding has an actual, genuine risk of impacting fairness at trial.”

The next step will be to determine who will take over the case and preside over future hearings and a potential trial. Circuit Court Judges Kelly Luther or John A. Gregory will determine who should replace Howorth.

Corps takes wait-and-see approach to rainfall forecasts ahead of…