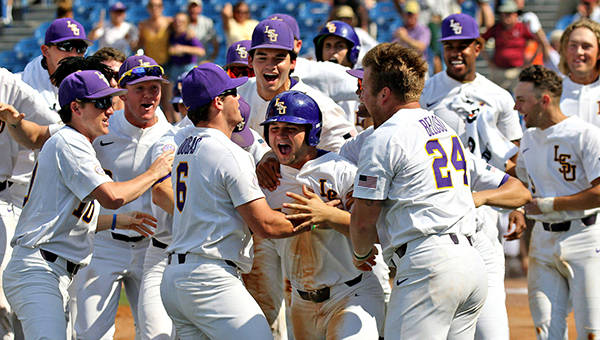 HOOVER, Ala. (AP) — As it turned out, LSU’s 17-inning, seven-hour marathon loss to Mississippi State wasn’t its strangest game in the Southeastern Conference Tournament.

It wasn’t even its strangest of the day.

In a bizarre finish, LSU scored the tying and winning runs after a wild pitch in the bottom of the ninth to defeat Auburn 4-3 in an SEC Tournament elimination game Thursday afternoon.

LSU trailed 3-2 and had runners on second and third with one out when Auburn reliever Brooks Fuller threw a pitch in the dirt. After catcher Matt Scheffler blocked the pitch, he looked for the ball and inadvertently kicked it several yards away.

The wild pitch enabled Giovanni DiGiacomo to score the tying run. Auburn first baseman Rankin Woley dove for the ball and made an errant throw that sailed past home plate and headed toward the third-base dugout, allowing Drew Bianco to score the winning run.

“I told the players after the game that there’s a saying in baseball that ‘Everyday you show up to the field, you’re liable to see something you’ve never seen before,’ and I can’t recall in 37 years that I’ve ever seen a walk-off win with two runs scoring on a wild pitch like we did,” LSU coach Paul Mainieri said. “In all honesty after last night, we’ll take whatever we can get.”

The crazy finish came about 13 hours after the Tigers lost 6-5 to Mississippi State in a 17-inning game that was the longest in SEC Tournament history. The teams played for 6 hours and 43 minutes and finished at 3:03 a.m. Thursday.

The Tigers got to their hotel a little after 4 and were back at the Hoover Met for a 12:45 p.m. start against Auburn.

“Who would give you a chance after getting into bed at 4:30 in the morning and having to get up four hours later for pre-game meal?” Mainieri said. “And somehow the kids found a way to go out there and do it, and I’m just really proud of them.”

LSU (36-24) next plays the loser of Thursday night’s late game between No. 1 seed Vanderbilt and No. 4 seed Mississippi State.

Auburn (33-26) was eliminated and will await the release of the NCAA Tournament bracket Monday.

“We’re going to circle the wagons and keep working, wait for Monday and see where we’re going and start our preparations,” Auburn coach Butch Thompson said.