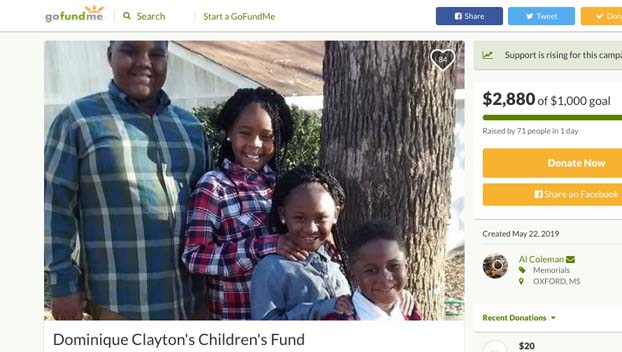 Family and friends of a Mississippi mother who was murdered this week — allegedly by a police officer with whom she was romantically involved — have begun a fundraising drive to help the victim’s four children.

Dominique “Lucy” Clayton was murdered on May 19, leaving behind four children ranging in age from 8 to 14 years old.

A GoFundMe campaign to benefit Clayton’s children in the months and years to come has been setup. Alex Coleman, who started the donation campaign, said he did so in part because of his close ties to the Clayton family.

Through his nonprofit organization Life Vision, Coleman said he was first introduced to the Clayton family.

“Life Vision is a youth leadership organization that is trying to get our youth to a place where they can succeed, even in the situations a lot of them are growing up in,” Coleman said. “Through that, I ended up working with about four of her family members’ kids and their parents.”

Coleman also found out posthumously that Clayton’s biological father is his uncle, making them first cousins. All the proceeds from the GoFundMe account will go toward the initial support of the Clayton children, as a means to help their guardian and family manage the financial cost of raising four children.

If the donations can lessen any financial burdens, he said, the family can focus on healing and being together. So far, the GoFundMe has raised approximately $3,000.

“It brought tears to my eyes when we hit the $1,000 mark. These kids depended on their mother, and she’s just suddenly gone,” Coleman said. “The people here can hear the cry of real need, and that makes all the difference when people are going through things – there are so many people who listen and respond.”

In addition to monetary funds, Coleman said the group behind the fundraiser is looking for other ways to minister to the four children. It takes a village, he said, and TyKez, 14, Jadarius, 8, Kyasia,10 and Lanyjiah, 12, are surrounded by so many who love them.

Those who can provide services like counseling, or who can even contribute to making their summer as peaceful and enjoyable as possible, are encouraged to do so.

“We need to surround her sons with men who can serve as a good example, and surround the girls with ladies who can guide them,” Coleman said. “We’re still looking into ways we can help the children and connect with the family to let them know they’re not alone. I know the family is going to surround (the children) every way they can, but I still believe that it takes a whole community to raise a child.”