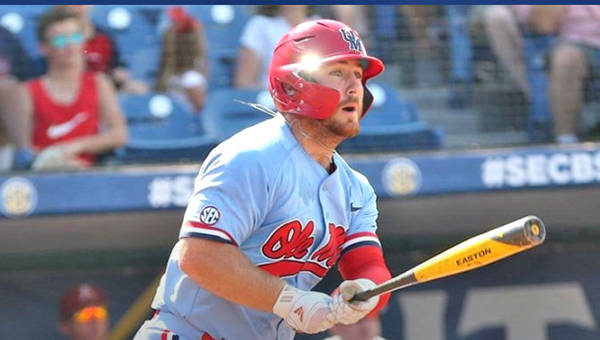 Thomas Dillard and Grae Kessinger drove in the tying and go-ahead runs in the eighth inning, and defending champion Ole Miss stayed alive with a 3-2 victory over Arkansas in an elimination game Friday.

Ole Miss (36-24) advanced to the semifinals, where it will play Georgia Saturday at noon.

The championship game is Sunday at 2 p.m. Ole Miss is trying to become the first repeat winner since LSU in 2013 and 2014.

“It was just another really well-pitched game for us. Another day where we struggled offensively,” said Ole Miss coach Mike Bianco. “The kids kept their composure and continued to play defense and pitch so we could win this type of game.”

Ole Miss trailed 2-1 entering the bottom of the eighth inning. Dillard drove home the tying run with a single after Ole Miss got going with a walk and a hit batter. Then Kessinger’s sacrifice fly scored Jacob Adams with what proved the winning run.

Parker Caracci worked around a walk in the ninth for his 10th save. Austin Miller (5-2) pitched 1 2/3 scoreless innings to earn the victory.

After retiring the first nine batters he faced, using just 35 pitches over the first three innings, the freshman lost things if just for a bit. Four of the first five Arkansas batters in the fourth inning reached base. Matt Goodheart, the second of the four, took Hoglund deep to center field for a 400-plus-foot home run and a 2-0 lead for the Razorbacks (41-17).

Hoglund had reached the fifth inning in only four of 13 starts, but settled back in after Goodheart’s homer. He escaped another bases-loaded jam in the fifth inning and made it into the seventh.

Hoglund wound up allowing just the two runs, on three hits and two walks, in 6 1/3 innings. He finished with six strikeouts.

“It was a great effort by Gunnar today. A true freshman that keeps getting better and better each outing,” Bianco said. “He was awesome the last few weeks, not just the Tennessee game but he pitched well at LSU. He just continues to get better.”

TAMPA, Fla. — Tampa took advantage of a throwing error on a bunt and a dropped throw by the catcher... read more