Alligator trapper: ‘What have I got myself into?’ 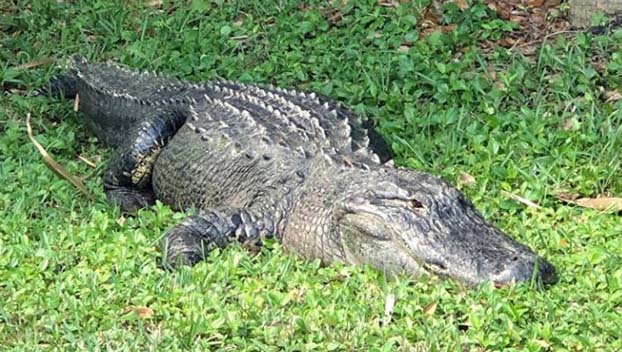 The life of a nuisance alligator trapper isn’t something most people think about, but it certainly isn’t like spending days in an office cubicle.

Licensed trappers are contracted by the Mississippi Department of Wildlife, Fisheries, and Parks to remove alligators that find themselves out of their normal habitat and become nuisances. Others have been intentionally or unintentionally fed by humans and become a danger.

Most calls to remove alligators are fairly routine and involve gators that have wandered near homes or homesteaded in farm ponds, but others range from humorous to downright dangerous.

Ryane Rawls of Wade knows alligators. He’s been a licensed alligator trapper since 2004, working on the alligator-rich Mississippi coast.

“We work up to 200 complaints a year,” Rawls said. “I’ve worked thousands of complaints over the years.”

One of those complaints involved a young alligator that developed a habit of sunbathing on a private boat dock and drawing attention.

“I had several complaints on an alligator that was supposedly showing up on a boat dock in Ocean Springs near a busy street,” Rawls said. “People would continuously say there’s a gator on a boat dock.

“I show up to the boat dock and sure enough he’s laying up there pretty as you please. He was just laying up there sunning with his mouth open. I was just going to put a snare on him because it looked like I caught him asleep.”

Rawls approached the gator and thought it would be an easy capture, but as he got closer he realized the gator was certainly a nuisance, but not a threat to anyone.

“He was painted realistic. I got all the way up to the alligator before I realized it wasn’t real.”

But the calls didn’t stop. Person after person would drive down the nearby street and report the wayward animal.

“It was one after another for a while,” Rawls said.” I probably got dozens of calls afterward until the landowner moved it.

The landowner got tired of me coming out there.”

Another call Rawls received came late at night and involved removing an alligator from a culvert.

“Some years back MDOT (Mississippi Department of Transportation) called and they were doing a project replacing culverts under the interstate,” Rawls said. “These guys were pretty much working 24/7 on this job.

“They called me about 10 o’clock one night and said there’s an alligator in one. They said the workers won’t go in until the gator is removed.”

Rawls arrived and assessed the situation. The culvert was about 4 feet tall, 100 yards long and knee-deep in water. He said the workers were standing nearby with eyes as big as saucers.

“I show up; just me, a catch-pole and a flashlight,” Rawls said. “I walk down the embankment and look in the culvert and the gator’s back there about 50 yards.”

Hunched over, Rawls entered the culvert.

Rawls took the snake outside the culvert. The workers were watching just as wide-eyed as before. Rawls went back in.

“I ended up walking the entire length of the culvert,” Rawls said. “He shot out of the end of the culvert and went into the marsh. I didn’t catch him, but he was gone and the workers could go back to work.”

Corey Hunt of Clinton is also a seasoned nuisance alligator trapper, but a call he received one day was particularly perplexing.

“Probably one of the strangest happened in Castlewoods subdivision,” Hunt said. “Me and (Ricky) Flynt were eating lunch and we got a call about an alligator up under a house.”

Hunt and Flynt, the Alligator Program coordinator for MDWFP, couldn’t figure out how an alligator could get under a house because the homes in the Rankin County neighborhood are built on slabs. When they arrived, they got their answer.

“We got there and they were doing foundation work,” Hunt said. “They had it jacked up about 10 inches.

If Hunt was going to catch the alligator, he had to go under the house and he wasn’t sure what to expect.

“I guess the biggest thing I was thinking at that point was I hope I get him before he gets me,” Hunt said. “When I got under the house he retreated to the other end. I could hear him crawling.”

Hunt crawled as far as he could. With only 10 inches between the slab and the ground, the space was too tight for Hunt to do much of anything.

“Fortunately he wasn’t laying there waiting for me when I got there,” Hunt said. “It would have been a mess.”

Hunt said he was asking himself, “What have I got myself into?”

Hunt decided he had no choice but to back out and let the gator come out on his own and the gator did just that. A week later the 7½-foot (2.3-meter) gator was spotted in a nearby pond on the neighborhood’s golf course and Hunt caught him.

In 2017 alligator trapper Craig Breland of Bay St. Louis got a call from law enforcement officers to remove an injured alligator from a highway. What happened that night almost killed him.

The gator measured 12 feet (3.7 meters), which is large by any standard. Breland said the reptile had been struck by a vehicle and refused to leave the road.

Breland managed to get a noose around the big gator’s neck and tied the other end of the rope to the back of his truck.

That allowed the gator to move from side to side, but not forward.

Breland approached the gator and placed his hands on top of the animal as he attempted to further secure it. That’s when the alligator made a sudden move and the situation escalated.

“I was about to be on top of him,” Breland said. “I already had my hands on him.

In an instant, the gator grabbed Breland by the right arm, chest and shoulder and began violently shaking him from side to side. Fortunately, Breland was able to slide free of the alligator’s jaws.

Breland sustained significant tissue damage, but no broken bones. The alligator was old with missing teeth and others that were worn down. At least in part, he attributes his escape to that. Breland was also glad he wasn’t grabbed elsewhere.

“The thing about this is how close he came to my head,” Breland said. “I am very lucky.

“If he had gotten my head, he’d have killed me. There’s no doubt in my mind.”