Horribly burned at 5, lost his mother at 9, graduate perseveres through pain, heartache 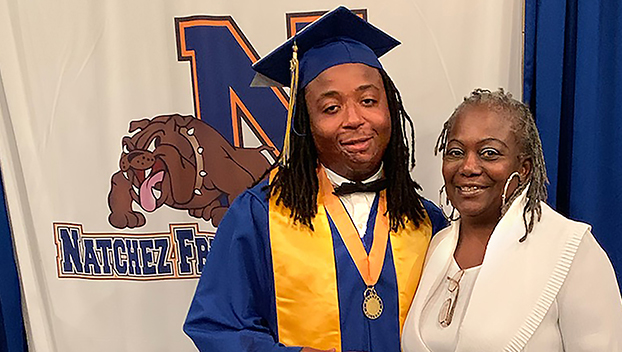 Ladonna Combs knew she was going to cry when her grandson DeCameron Combs received his diploma Friday evening.

“I am going to boohoo,” Combs said before the ceremony at Natchez High School.

Despite the pain and suffering of years past, Combs said the tears would be happy ones.

“It has been overwhelming,” Ladonna said, remembering all that she and DeCameron have been through since the fire in 2007.

“DeCameron was burned at age 5. He lost his mother at age 9,” Ladonna said.

Trying to light a candle in Ladonna’s house one night, the burning wick hit his boxers and set the clothing on fire, Ladonna said.

“He ran down the hallway to me, and I woke up, and he was in flames,” Ladonna said. “I couldn’t see anything but his eyes.”

Unable to get the water faucet in the bathroom to work, Ladonna smothered the flames with a towel.

DeCameron was rushed immediately to the hospital. From there, he went to a regional burn center and then was flown to Shriners Hospital in Galveston, Texas.

“I spent over a year and a half to two years in the hospital in rehab,” DeCameron said.

Since then, the Natchez High School graduate has endured more than 40 surgeries to help him heal and recover.

“It used to be painful, but I am used to it now,” DeCameron said.

Even though more surgeries have been recommended, DeCameron has said he doesn’t need them, Ladonna said.

“The surgeries are cosmetic, and he told them he looked good enough,” Ladonna said.

Four years after the fire, tragedy struck again when DeCameron’s mother died when she was hit by a vehicle while she was crossing the street.

“The truck didn’t see her and hit her,” DeCameron said.

Despite the pain and heartbreak, Ladonna said her grandson has persevered.

“He never had a failing grade. He stayed determined,” Ladonna said. “He is fearless.”

Ladonna said mentors such as Natchez-Adams School District interim Public Relations Coordinator Tony Fields have been instrumental in working with the family when DeCameron has been away at the hospital.

“He has been like a family friend,” DeCameron said. “When I first got burned, and when I felt isolated, he would encourage me to look at myself like I was just one of the other kids.”

Fields is quick to say that much of the credit goes to DeCameron’s classmates.

“I give a lot of credit to the kids. They really cared for him and wanted to make sure he was included,” Fields said.

DeCameron said once his classmates understood what had happened, he felt a part of the class.

“Once they understood it could happen to anyone, they accepted me for who I am,” DeCameron said. “I was the same person. I just got burned.”

Fields said DeCameron’s determination has also guided him through.

“He hasn’t let anything stop him,” Fields said. “He hasn’t let the fire or his mom passing away be a crutch. Things happen, and he just keeps going.”

Fields said he recognized DeCameron’s personality when DeCameron was young.

“That is just who he is. I saw that when he was in elementary school,” Fields said. “For him to be able to persevere and endure what he has been through, he is a role model for all of us.”

Ladonna said despite nurturing her grandson through the burns, and through the loss of his mother, she feels blessed.

Ladonna said she is grateful for seeing her grandson graduate and will be happy to cheer for him when he plays football next year at Copiah-Lincoln Community College in Wesson.

DeCameron plans to pursue a degree in nuclear engineering.

Soon after graduation Friday night, DeCameron was headed to summer camp for the Mississippi Burn Foundation to be a mentor for other burn victims.

“I feel like I can motivate them,” DeCameron said. “I tell them just because of how you are on the outside, doesn’t change who you are on the inside.”

Ladonna said she might have questioned whether she was up to the task with her grandson from time to time, but is pleased with the young man she has helped raise.

“Overall, I would say I am the lucky one — that I got a chance to experience everything that he has been through.,” Ladonna said. “I am so proud of him.”