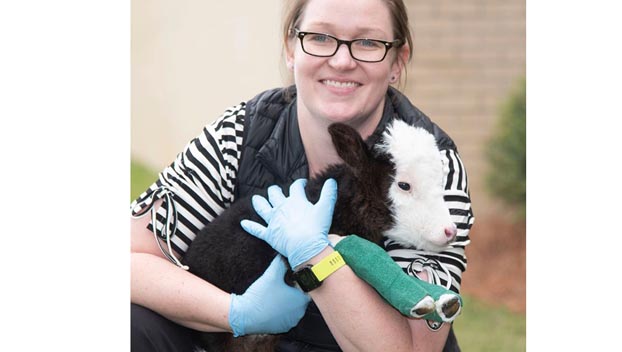 Lil' Bill, the diminutive bull that captured the hearts of people all across America when he was born premature, died this week of complications related to his development. He's pictured here with his lead veterinarian, Dr. Gretchen Grissett. Photo Courtesy Mississippi State University.

Lil’ Bill, the tiny bull that captured the hearts of social media followers around the world, died Monday [May 27] at Mississippi State’s College of Veterinary Medicine from complications associated with his prematurity.

Provided advanced medical care by the university’s veterinarians for the past seven months, Lil’ Bill faced a number of obstacles as a result of his prematurity and suspected dwarfism, but was able to overcome many of them, according to CVM’s Dr. Gretchen Grissett.

Despite her team’s best efforts, the bull—at birth weighing less than one-tenth of the average newborn bull—succumbed to organ failure as a result of significant infection.

“He had a strong will to survive, and with our help, found a way to overcome virtually every hurdle he faced. However, for the last few weeks, his health consistently deteriorated,” said the assistant clinical professor of pathobiology and production. “As with most preemies, Lil’ Bill faced significant developmental issues, and in the end, his underdeveloped gastrointestinal system and immature lungs contributed significantly to his death.”

According to CVM Dean Kent Hoblet, Grissett and her team stand to be commended for the outstanding work they did with this one-of-a-kind case.

“Lil’ Bill was far from a typical patient. Dr. Grissett and the entire CVM team worked extremely hard to provide him the very best care and best possible chance of surviving,” Hoblet said. “The fact that he not only survived, but enjoyed a good quality of life for almost seven months, is a significant achievement on their part. I’m proud of our team’s dedication to him and of their commitment to doing what was best for him.”

“We all learned so much from this tiny bull,” Grissett said. “He challenged us and inspired us, and he will definitely be missed.”

The Mississippi State University College of Veterinary Medicine is one of only 30 accredited veterinary colleges in the U.S. and is one of only a few colleges that provides two full years of clinical experience in addition to coursework and labs.

Mississippi farmers see no end to flood pain in…