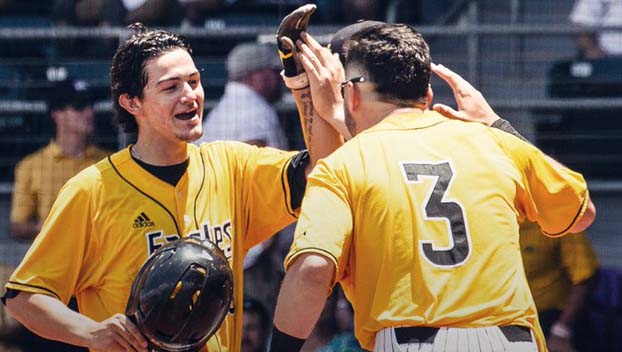 Storme Cooper and Matt Wallner each homered during a 12-run fifth inning, and Southern Mississippi racked up 17 hits in a 15-3 victory over Arizona State on Friday in the opening game of the NCAA Baton Rouge regional.

Danny Lynch was 3-for-5 with a home run, double and four runs batted in for the Golden Eagles (39-19), who won the Conference USA tournament last week and have won six straight.

The Sun Devils (37-18) took a 1-0 lead on Lyle Lin’s sacrifice fly in the bottom of the fourth before Southern Miss broke the game open against starting pitcher Alec Marsh (9-4) and reliever Blake Burzell.

Cooper led off the fifth with his first homer of the season and later that same inning drove in two runs with a single. Wallner drove home a run with a single in his first at bat of the inning before his two-run shot to right — his 22nd homer this season — capped the rally.

Southern Miss starter Gabe Shepard (3-0), who missed much of the season while rehabilitating from elbow surgery, delivered pitches exceeding 95 mph in the early innings. He allowed two runs on six hits and struck out four in 5 2/3 innings.

Spencer Torkelson hit his 22nd home run of the season for Arizona State.