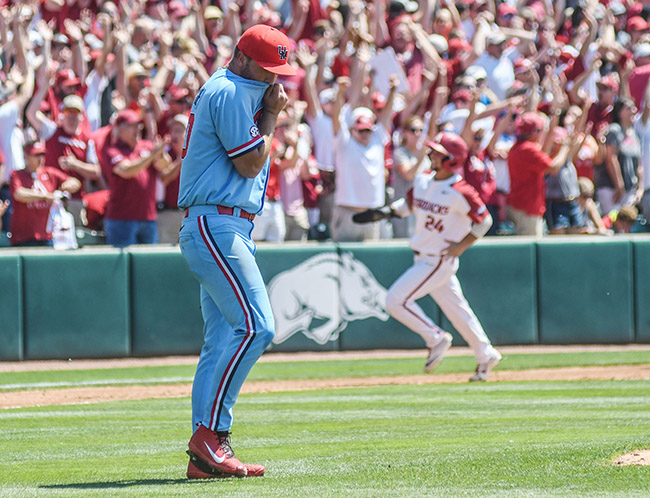 Arkansas' Dominic Fletcher (24) rounds third base as Mississippi's Will Ethridge (20) reacts after giving up a three run home run to JAck Kenley in an NCAA Super Regional at Baum-Walker Stadium in Fayetteville, Ark. on Saturday, June 8, 2019. (Bruce Newman, Oxford Eagle)

Things started so well for Ole Miss at Baum-Walker Stadium on Saturday morning. But as quickly as they started, they fell apart even quicker for Ole Miss and Will Ethridge in game one of the Super Regional. Arkansas took game one with an ugly 11-2 final score and are now just one win away from the College World Series.

“At this point, everybody is really good and it comes down to playing well. Boy did they play well today,” said Ole Miss head coach Mike Bianco. “Unfortunately, we were the opposite. We didn’t have an answer on the mound and offensively, (Isaiah Campbell) was just too much for us.”

Grae Kessinger homered off of fellow second-round pick Isaiah Campbell in just the second at-bat of the game, putting Ole Miss up a quick 1-0 to start the Super Regionals. However, when that first inning came to a close, it was the Rebels trailing Arkansas 4-1. The Razorbacks scored seven more before Ole Miss would ever get back on the board.

Will Ethridge was just off on Saturday. His command was all over the place and his fastball was flat. The result? One of the best lineups in the Southeastern Conference took him to the woodshed.

The Razorbacks shelled Ethridge early, scoring four off him in the first and eight total runs, six of them earned, in a short outing. Ethridge had made it at least six innings on the mound in every outing since April 18. He couldn’t make it out of the fourth inning Saturday. Statistically, it’s his worst outing on the mound this year, and it’s not particularly close.

“They just swung it well. They hit each pitch I had very well,” Ethridge said. “I wasn’t able to locate my pitches very well. It wasn’t my day today and they took advantage of it.”

Ole Miss just about punted on the game when they took out Ethridge. Their top bullpen arms – Houston Roth, Zack Phillips, Austin Miller and Parker Caracci – never warmed up, saving them for later use. At 8-1, everything from that point on was about winning on Sunday.

Arkansas took a 9-1 lead behind their second home run in the game, this time a shot deep to right field off of Tyler Myers that hit the scoreboard. Two innings later, another deep shot, again off Myers, put Arkansas up 11-1. The top of the Arkansas order hit 9 for 18 and accounted for seven RBIs in the game.

Isaiah Campbell was electric all day against the Rebels. A second round pick in the MLB Draft earlier this week, everything was working for the Razorbacks junior on the mound. After giving up the home run to Kessinger in the first inning, Campbell shut down 24 of the next 26 Ole Miss batters. He thew a career high 8.1 innings for Arkansas, surrendering just five hits and two lone run off solo shot homers. Dillard also went yard in the 9th for the second Ole Miss run that ended Campbell’s day.

“He’s really good. I know and we know that every pitch we were going to have to battle,” Kessinger said. “Just because I hit one out of the yard doesn’t mean he was going to give in. From then on he just kept making pitches. In the eighth inning I think he was sill hitting 95 or 96 (miles per hour).”

Every possible thing that could have gone wrong for Ole Miss did in game one. The positive? It can’t get any worse than it did on Saturday afternoon. Ole Miss held some back when the game got away from Ethridge early. They’ll be back tomorrow and now need to win consecutive games on Sunday and Monday.

Game two of the series will be back here at Baum-Walker Stadium tomorrow at 2:00 p.m. Doug Nikhazy will be on the mound for the Rebels with their season on the line.