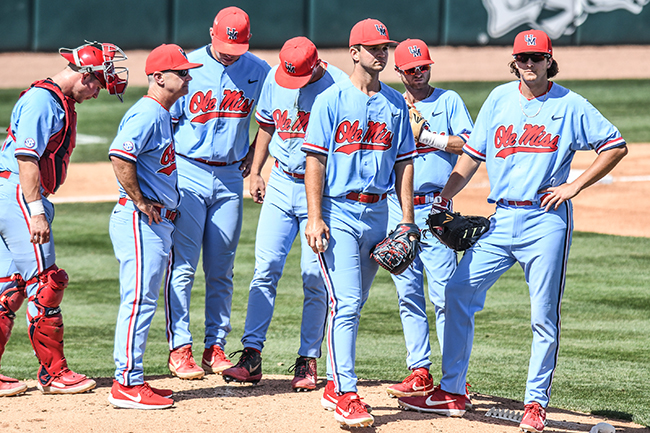 Anything that could have gone wrong for Ole Miss did go wrong on Monday in Fayetteville.

The Rebels dropped game three of the Super Regionals to Arkansas in ugly fashion, losing 14-1. The loss effectively ends their season and halts a remarkable postseason run beginning in Hoover. The 2019 iteration of the Ole Miss baseball team is no more.

“Personally, I thought the first game was all them. The second game was basically all us. I thought today would be a little bit of a mix, more of a dogfight,” said junior Thomas Dillard. “But they got out to an early lead and had better swings than us. They just kept adding on. You have to give it to them – they never stopped.”

A ball popped in-and-out of Thomas Dillard’s glove. Cooper Johnson let a ball get behind him leading to an Arkansas run. No pitcher was able to remotely limit Arkansas and Ole Miss was unable to string together timely hits.

Ole Miss was able to get to Arkansas starter Patrick Wicklander quickly. The Rebels drove Wicklander off the mound in the second inning. Ole Miss tacked one run on Wicklander in the first, but Arkansas coach Dave van Horn yanked his freshman well before the Rebels could do too much damage to him.

Mike Bianco did the opposite.

Gunnar Hoglund worked his way quickly through the first inning. He gave up a few deep fly balls but recorded three outs on the first three batters faced. The second inning went differently. After the first batter grounded out, the next four batters Hoglund faced – and five of the next six – reached base in the second.

Where Van Horn was quick to move on from his freshman starter, Mike Bianco hung by his to his team’s detriment. Hoglund gave up four in the second inning, and Bianco trotted him back out in the third with nearly all their top bullpen arms ready to go. He faced just two more batters, both would reach base and later score, before Bianco would go to the bullpen and Austin Miller.

“The truth of the matter is, we needed some length to get through the game,” Bianco said. “We had Miller and we had (Parker) Caracci, but we needed a little length… They’re so good offensively. We fell into bad counts and that offense will make you pay for that.”

As much as one could sit and question the decision to leave Hoglund in, Arkansas was simply the better team all day. It didn’t really matter who was on the mound, the Razorbacks offense was pummeling them. Arkansas recorded 12 hits on the day, including four doubles and two home runs. The Ole Miss offense couldn’t even begin to measure up.

Following the first inning score, a Cooper Johnson RBI single up the middle, Ole Miss went eight scoreless innings. They compiled two hits in the first inning and just five the rest of the game – just not nearly enough to keep up with the Razorbacks.

After looking like a fish out of water during their last regular season series against Tennessee, the Rebels turned on one of the great stretches in recent memory. Ole Miss fought off elimination four times in the SEC Tournament, becoming just the third team this decade to go from Tuesday all the way to the tournament finals.

“I’m proud of what we’ve done. It’s just disappointing because it’s a tough ending. Obviously today was all Arkansas in every phase of the game,” Bianco said. “They were just so good offensively and Scroggins out of the bullpen was just tremendous and really gave them a lift. We just couldn’t figure him out. But it was just their day. I’m certain that they’ll do well next weekend in Omaha.”