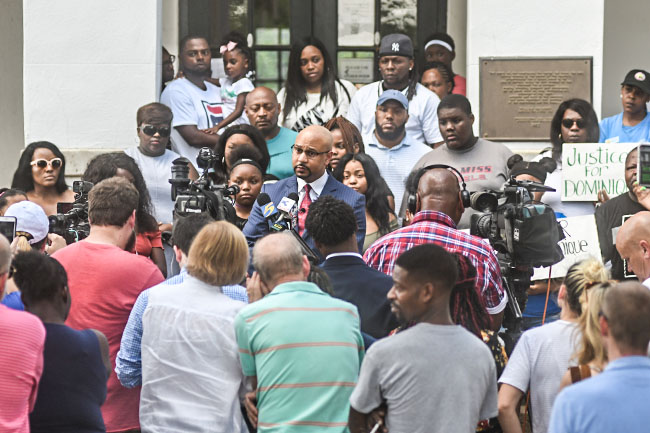 Carlos Moore, representing the family of Dominique Clayton, speaks during a press conference outside the Lafayette County Courthouse in Oxford, Miss. on Friday, May 24, 2019. Clayton died Sunday and her death was ruled a homicide. Former Oxford, Miss. police officer Matthew Kinne has been charged with murder in connection with her death. (Bruce Newman, Oxford Eagle)

The family of Dominique Clayton, who was allegedly murdered by an Oxford Police officer, is asking for $5 million from the City of Oxford.

The formal request for ‘in excess of $5 million for compensatory and/or punitive damages’ came in letter sent to the City of Oxford and interim Oxford Police chief Jeff McCutchen on Monday. Attorney Carlos Moore, who is representing the Clayton family, sent the notice of claim to Oxford City Hall and the Oxford Police Department.

The letter is the first step towards a wrongful death lawsuit being filed.

In the letter, Moore alleges that Matthew Kinne was on-duty at the time he entered Clayton’s home and allegedly murdered the 32-year-old around 1:45 a.m. on May 19. The letter also states Kinne was wearing his uniform at the time.

Clayton’s body was found by her eight-year-old son, Jadarious, around 2 p.m. on May 19 when OPD received a call to her Brittany Woods home. Kinne was arrested on May 20 and subsequently terminated from the OPD on May 21 by the Oxford Board of Aldermen.

Moore’s letter also mentions a relationship between Kinne and Clayton and the former police officer would ‘frequently’ visit Clayton in the middle of the night.

“He would arrive at around 1:30 a.m. and 2 a.m. and leave around 4 a.m. on Wednesday, Thursday, Friday, and Saturday,” the letter read. “Prior to her death, Ms. Clayton informed Officer Kinne of the possibility that she was pregnant.”

Five days before Clayton’s death, the letter states Kinne visited her ‘unexpectedly’ and she expressed concern to her sister that Kinne might hurt her in some way. On May 16 Kinne forced Clayton to get rid of her dogs, per the letter.

Moore also mentions other OPD officers caused ‘undue stress’ on Clayton’s mother, Betsy, and other family members by initially telling them Dominique had committed suicide. A gun was not found in Clayton’s home or anywhere else at the crime scene.

On June 4 the city accepted the resignation of two former OPD officers, Collins Bryant and Ray Winters. Moore said the two officers submitted their resignations ‘under duress’ on May 23. On May 24 Oxford Mayor Robyn Tannehill asked Mississippi attorney general Jim Hood’s office to conduct an internal investigation into the OPD on behalf of the city.

“Ms. Clayton suffered and her relatives continue to suffer mental and emotional pain and anguish as a result of the aforementioned offenses,” the letter continued.

The letter will be sent to the City of Oxford’s liability insurance carrier.