Alligator snapping turtle researcher: ‘If they hit you right they could take a hand off’ 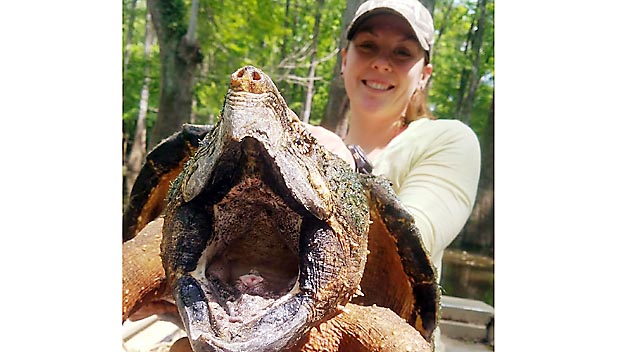 A pair of University of Southern Mississippi graduate students recently made headlines with the capture of a 62.8-pound alligator snapping turtle in Lamar County, but that turtle pales in comparison to a massive 117.6-pounder the researchers captured earlier in central Mississippi.

“The biggest one; that was fun,” researcher Luke Pearson said of the 2018 catch. “It was a monster.

“He had a very large head. No exaggerating, it was as big as a basketball. His legs, they were probably as big as my thigh. His tail alone, if I put my hands around it my fingers would barely touch. It was a hefty turtle. He was an absolute monster.”

Capturing the reptile was only half the battle. Pearson and former research partner Gabbie Berry, who will graduate this summer with a master’s degree in biology, needed to collect data such as the weight and shell length of the dinosaur-like creature — and it needed to be done carefully.

“They have a legendary reputation for having extremely powerful jaws, and they do,” Pearson said in an earlier interview. “The big ones, I wouldn’t doubt if they hit you right they could take a hand off.”

“With both of us it was a struggle to get him in the boat,” Pearson said. “It was a challenge working with a turtle of that size on the front of a boat with two people trying to hold him down.”

The research, which is funded by the U.S. Fish and Wildlife Service and the Mississippi Museum of Natural Science, is an effort to document numbers and locations of alligator snapping turtles in Mississippi. Pearson said overall numbers have been in decline for decades and some have sought protection of the turtles, but there isn’t enough data to determine if there is a need. So, earlier efforts to gain protection failed.

“This time around we’re trying to fix that problem,” Pearson said. “There’s a lot of states doing this — Florida, Alabama, Georgia, Louisiana, Tennessee — pretty much most of the southeastern states.

“We don’t know anything in Mississippi. It’s never been done before.”

Lucas Haralson, a USM graduate student who is now working with Pearson, said the research is important.

“I would argue that any animal native to an ecosystem is important to the health of that ecosystem,” Haralson said. “Turtles, in general, have been on Earth for hundreds of millions of years.

“Probably, out of the 300, it would be maybe 35 over 50 pounds,” Pearson said. “It’s a pretty low percentage compared to other states that have been surveyed. The average is 11 pounds, so it’s relatively small.”

However, the population of young turtles in Mississippi looks better than some other places.

“We’re actually finding more juveniles in Mississippi than in other states,” Pearson said. “We do have reproduction.

“We have plenty of babies around. What we’re missing are the large adults. We don’t know what’s going on there. Anything over 70 pounds is rare for me to catch. They just don’t seem to be abundant.”

Pearson and Haralson are currently working in northeast Mississippi and by the end of next summer they should be able to provide insight as to what the alligator snapping turtle population looks like statewide.

“Hopefully, next year we’ll be able to go to the Delta,” Haralson said. “We were unable to go this year because of flooding. Over the course of four years we will have sampled all the major drainages in Mississippi.”