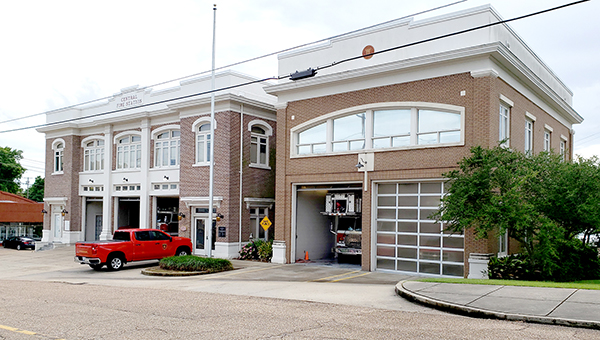 The cost of replacing windows at the Vicksburg Central Fire Station has Mayor George Flaggs Jr. considering building a new fire station to replace it. A four-member committee has been appointed to consider the possibility of a new station. (John Surratt | The Vicksburg Post)

Objections to bids to replace the windows at the city’s Central Fire Station could lead to the construction of a new fire station.

The Board of Mayor and Aldermen Monday received bids from Arcon Group Mississippi of Madison, and Fordice Construction of Vicksburg to replace the windows as part of a renovation of the fire station on Walnut Street. Both bids were over the estimated $350,000 for the project.
Arcon Goup’s base bid was $392,700. Fordice’s base bid was $499,200.

The Central Fire Station is a Mississippi Landmark and on the National Register of Historic Places because it is in the city’s Downtown Historic District.

The bids are based on national guidelines set by the Secretary of the Interior and administered by the Mississippi Department of Archives and History, and require using certain materials in the renovations.

Fire Chief Craig Danczyk said the station’s old section is almost 100 years old, and many of the windows in that section are rotted. He recommended the board take the bids under advisement.

“You don’t pay half a million dollars for a window on a building as old as that,” Flaggs said. “We need to seriously start looking at building another station somewhere.”

Flaggs gave no indication where the new station might be located.

The mayor added the station “is obsolete, then it’s landlocked. You can’t expand it.

“I’m talking about $500,000 for windows,” he said. “We built the last station for $1.6 million. Let’s take a serious look at that. This may be the time for us to look at the future and not try to preserve the past.”

South Ward Alderman Alex Monsour said when the board began considering renovating the station, “We knew it was going to be a sore subject, because when Archives and History got involved they were going to hold our feet to the fire and it was going to make us come to a hard decision. We’re at that hard decision time.”

Flaggs appointed a committee of Danczyk, accounting director Doug Whittington, assistant public works director Jeff Richardson and city attorney Nancy Thomas to review the bids for the windows and compare the cost of renovating and remodeling the Central Fire station versus building a new station.