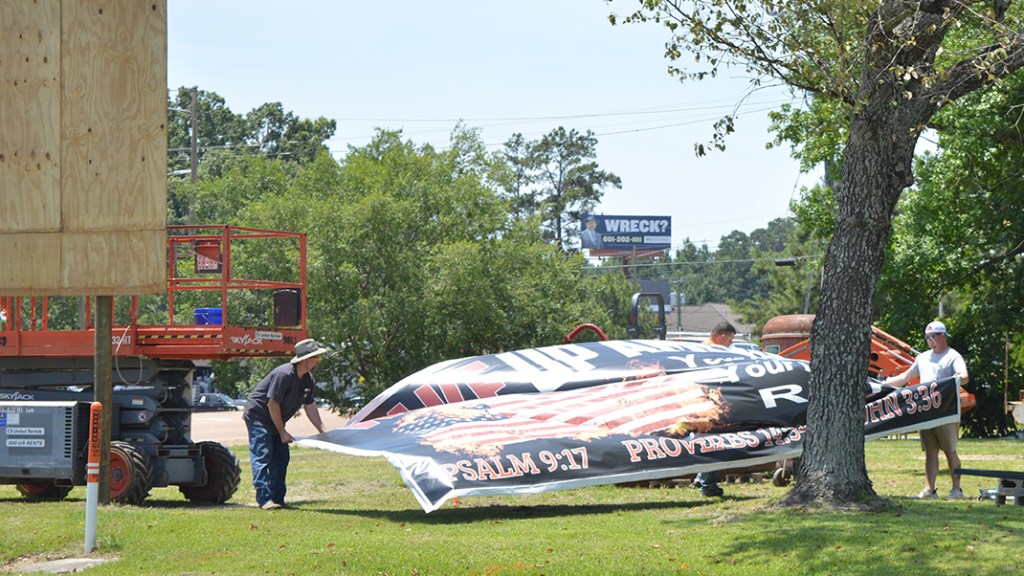 Photo by Gracie Byrne Workers Friday take down the Ten Commandments and “Wake Up America” billboards that were erected illegally on Hwy. 51 South last year. The signs’ owner said he’s getting them in compliance and he expects them to be back up this week.

A Christian sign at a busy intersection on Hwy. 51 South in Brookhaven came down Friday, but the businessman who put it there said it won’t be gone long.

A trio of workers — on behalf of Wayne Wallace, who owns Brookway Market Basket on Brookway Boulevard as well as the corner lot at Industrial Road and Hwy. 51 — took down the Ten Commandments and “Wake up America” billboards that were erected illegally last year.

After more than 14 months of back-and-forth discussions, gentleman’s agreements, executive sessions by the Brookhaven Board of Aldermen and letters of non-compliance sent by the city’s attorney, Wallace is correcting the placement and support structure of the billboards.

Wallace anticipates the sign will be back up as early as today, but the weather will be a major factor in that. Thunderstorms are expected in Brookhaven through Friday.

In May, city attorney Joe Fernald — at the direction of the Board of Aldermen — sent letters to all business owners who weren’t in compliance with the city’s laws concerning billboards and signs.

Fern said the sign wasn’t in compliance with the city’s ordinance, and that Wallace did not initially file for a permit.

Wallace originally put up the billboards on his property in March 2018. The billboards, which are joined together at a 90-degree angle, feature the Book of Exodus’ Ten Commandments on one and the words “Wake Up America” and a Bible verse on the other.

Wallace and city officials came to an agreement April 2018 regarding the sign — Wallace would make the changes needed for the sign to come into compliance.

According to the sign ordinance, billboards can only be constructed in a C-3 commercial district. Outdoor signs shouldn’t exceed 300 square feet in sign area.

Signs must be set back at least 25 feet from the front property line, be 15 feet to the side and 15 feet to the rear. A sign’s maximum height should be 35 feet high, and signs can only be supported by a single metal post.

Anyone violating the ordinance can be fined at least $50 or more than $200, along with court cost for each offense. Each 30-day period can be considered a separate offense if the violation isn’t corrected.

“I’ve done everything they’ve asked me to do,” Wallace said. “Everything will be in compliance.”

It is not known at this time how many letters of non-compliance were issued to business owners and individuals.

Gulf fishermen on flood damage to fisheries: ‘The light…