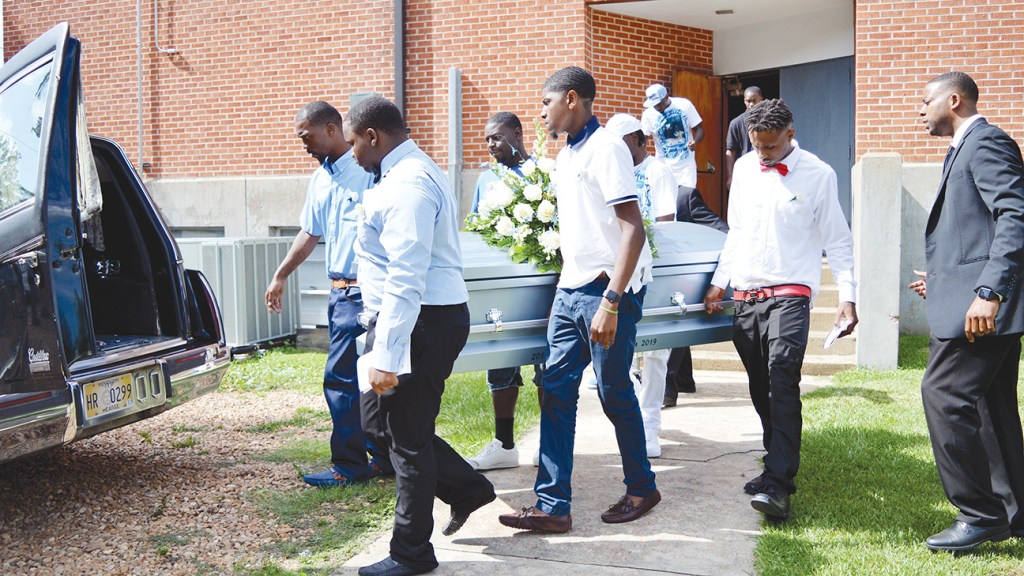 The boy, who was fatally wounded in a drive-by shooting June 12 in the Brignall community, would have attended BES as a third-grader in the fall.

Flowers of white and blue — Allen’s favorite color — surrounded the open casket. A poster featuring photos of Allen stood near the casket. The title read, “Stop the Violence.”

Members of Allen’s family, dressed in blue, made their way past the casket for final goodbyes before the service started. Friends and neighbors wore T-shirts printed with Allen’s photo and the hashtag JusticeforYang.

Allen’s 5-year-old sister Qua’Nyia wore a white dress and bow and embraced her mother, Constance Adams Allen, who was granted secured release from Rankin County Detention Center to attend her sons’ funeral. She is in custody of the Mississippi Department of Corrections. Qua’Nyia lives with her father, Quantavious Allen Sr. and her grandmother, Ophelia Allen at the Grant Road home where her brother was shot while playing a video game in the living room.

Trina Noble was the emcee for the ceremony with Pastor Shelby Mitchell of New Jerusalem Church officiating.

A prayer and words of encouragement were given by coach Patrick Hardy, principal of Alexander Jr. High.

“Whatever the answer is, God will give it to you,” Hardy said. “He will provide for us and he will protect us.”

With a booming voice and a smile, Hardy brought words of encouragement to the family and attendees. As he reminisced, he brought smiles and applause from the crowd.

“If we hold on to God’s unchanging hand, he will provide,” Hardy said.

The crowd roared as Hardy concluded his portion of the service.

Rev. Phillip Sterling compared Allen to Moses, a figure from the Old Testament. He said Allen and Moses had something in common — they brought people together.

“God sacrificed one child to bring a community together,” Sterling said. “In spite of the pain and the hurt, we thank you, God.”

“Let not your heart be troubled,” he said, quoting the first verse of the chapter.

Mitchell said Allen knew where he was going, and that he was ready.

“When you get that appointment with God, you’ve got to keep it,” Mitchell said.

To conclude his portion of the service, Mitchell gave some final words of encouragement to the crowd.

“Everything is gonna be alright in the end,” Mitchell said.

Williams Mortuary was in charge of arrangements and burial followed the service at Hillcrest Cemetery.