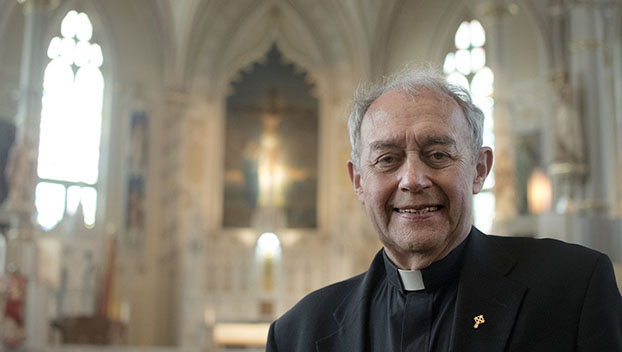 The Rev. David O’Connor is retiring Sunday after serving 55 years in the ministry, including 22 years in the Natchez community. The St. Mary congregation invites the community to a reception honoring O’Connor from 3 to 5 p.m. Sunday in the church’s family life center. (Nicole Hester / The Natchez Democrat)

O’Connor is retiring Sunday after serving 55 years in the ministry, including 22 years in the Natchez community.

O’Connor said he was ordained in his home country of Ireland on June 14, 1964, and held various positions in ministry before arriving in Natchez in 1986 as pastor of St. Mary Basilica, where he served for six years and parted ways only to return as pastor in 2003.

For O’Connor, the most memorable part of that experience was witnessing members of his congregation grow, change and carry out visions, he said.

“The congregation needs a vision, but the vision should never be imposed on them from the outside,” O’Connor said. “Rather, it’s a slower process of distilling or extracting from their insights and their wishes and converting that into a vision statement. There is an Old Testament quotation that says, ‘Without a vision my people perish,’ … and that is so true with any kind of leadership role within the church or community.”

O’Connor said he was able to witness and be a part of several transformations throughout the church and the community and he achieved a level personal growth from those experiences as well.

During his first six years as pastor in Natchez, O’Connor completed his doctoral degree at Emory University in Atlanta and also served as a leader in the Ministerial Alliance, a board member for the Natchez Stewpot, worked as a supervisor for Cathedral school and helped establish a chapter of Habitat for Humanity.

O’Connor said he also developed a soft spot for the Natchez community as he was often recruited to play on golf teams because of his ability to hit a long drive and he attended school activities.

“I don’t know at what stage this happens,” O’Connor said, “but you go out into the community to work with the community and minister among them, and at some point along the way you become a part of them — you become one of them.”

Within the church, O’Connor said he witnessed the development of youth and adult study programs because the church sponsors graduate degree programs in theology at Loyola University in New Orleans.

O’Connor said he also found he was able to help people and develop a level of trust with people in the community during difficult times.

“Funerals are an amazing time in the lives of people,” O’Connor said. “Not to say that I enjoy funerals, but I think they are key moments in quality ministry.”

O’Connor said he would miss being a part of a metaphorical team on which he played the quarterback for more than 20 years. O’Connor said hewould not be gone for good and would continue to coach from the sidelines.

O’Connor said he plans to visit his family in Ireland for a couple months before returning to Natchez to tie up loose ends.

“Retirement feels like leaving an extended family,” O’Connor said. “I know there will be satisfying aspects of it, but at the moment, that is what it feels like. … Retiring means leaving a community that I feel very much a part of, but it doesn’t mean that my relationship with this community is ending.”