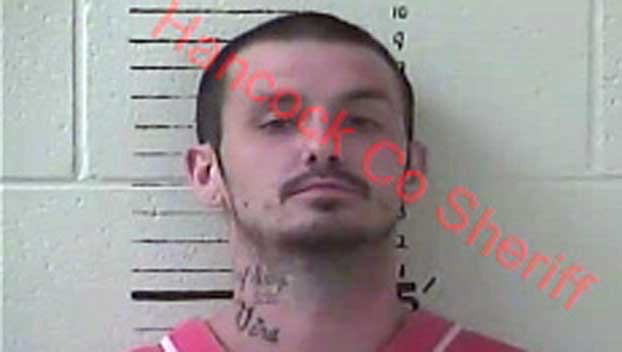 A K-9 officer with the Hancock County Sheriff’s Department was stabbed Tuesday while in pursuit of a local man.

Carriere resident Jeremy Wayne Mitchell, 30, is suspected as being responsible for the stabbing of the dog after fleeing from officers during a traffic stop, the Hancock County Sheriff’s Office reported.

He was arrested in Hancock County Tuesday after fleeing from a deputy who attempted to conduct a stop on his vehicle at about 2 p.m.

Three other people were in the vehicle at the time of the stop, identified as Brittany Dawn Adams, Joseph Ingram and Gina Amily Mitchell, 31, of Carriere. The jail’s online database did not list Adams or Ingram, indicating they are no longer being held in the jail, so additional identifying information for those suspects was unavailable.

During a search of the vehicle, the deputy found a felony amount of methamphetamine and drug paraphernalia. The three passengers who did not flee were arrested for possession of a controlled substance.

In an effort to locate Mitchell, a K-9 unit was called to track his location. During the search deputies saw Mitchell and gave him commands to surrender with the warning that the K-9 would be released if he did not comply, according to the press release.

When Mitchell continued to flee, the K-9 officer was released.

Deputies lost sight of both Mitchell and the K-9 because of the terrain. After a short time, the dog’s handler called for the dog to return, but it did not, the release states.

Numerous deputies and a civilian who granted access to hunting property located the K-9, named Loco, at 4:30 p.m. The dog was later determined to be suffering from a stab wound to the abdomen. The canine underwent surgery and is expected to make a full recovery, the release states.

Mitchell was captured at 6:20 p.m. as he attempted to run across I10 and was arrested for aggravated assault on a law enforcement officer, possession of a controlled substance, tampering with physical evidence, felony eluding and multiple traffic violations, the release states. According to jail records, those traffic violations include expired or no tag, driving while license suspended, failure to yield right of way, failure to yield to blue lights, no turn signal, no proof of insurance and careless driving. Mitchell also had a hold on him with the Pearl River County Sheriff’s Department, jail records show.