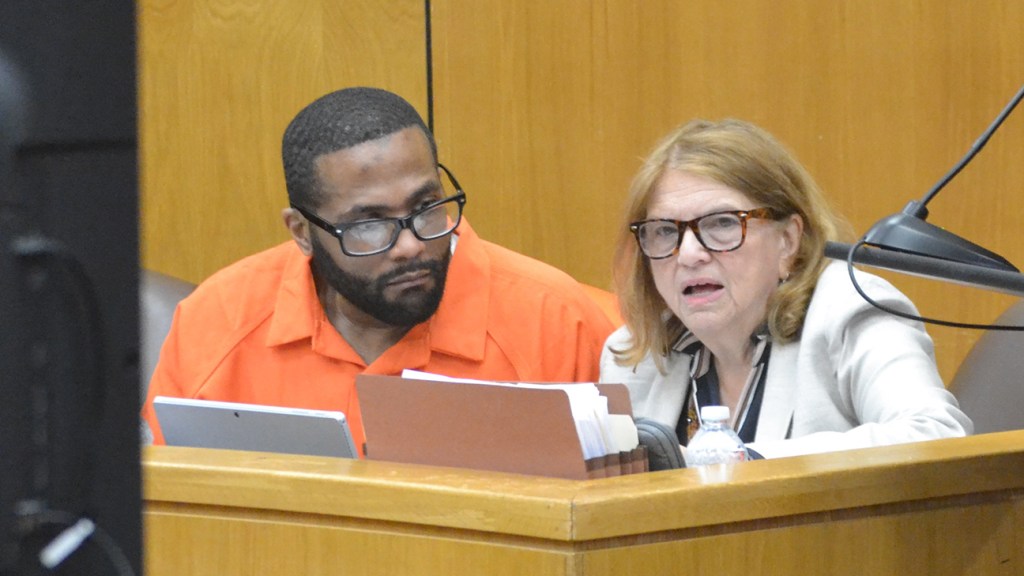 A Lincoln County judge ruled Thursday that a confession Willie Cory Godbolt gave to a newspaper reporter will be admissible at his capital murder trial in February.

Godbolt, 37, attended the motion hearing, watching from his seat at the defense table. He took notes with his right hand, which Judge David Strong had allowed to be uncuffed for the two days of hearings in Lincoln County Circuit Court.

Alison Steiner and Katie Poor of the Office of State Public Defender unsuccessfully asked Strong to exclude certain evidence the state presented during discovery, such as reporter Therese Apel’s cell phone video that shows Godbolt at the time of his arrest May 28, 2017, after a seven-hour rampage that left eight people dead including two children and a sheriff’s deputy.

Strong ruled Godbolt spoke to Apel, who identified herself as a member of the media twice, of his own free will and accepted the testimony of more than a dozen officers who said she was not directed by law enforcement to be at the arrest scene, which was in the middle of East Lincoln Road, or was she told what to ask by police.

Apel shot video from 6:35 to 7:05 a.m. May 28, 2017, which were presented as 10 separate videos in court. Apel testified she had limited storage on her cell phone and shot videos only when there was “action” to capture.

Godbolt is charged with four counts of capital murder, four counts of first-degree murder, attempted murder, two counts of kidnapping and armed robbery related to the shooting deaths of deputy William Durr, 36; Barbara Mitchell, 55, her daughter, Tocarra May, 35, and Mitchell’s sister Brenda May, 53, all of Bogue Chitto; Austin Edwards, 11, and his cousin, Jordan Blackwell, 18, of Brookhaven; and Ferral Burage, 45, and Sheila Burage, 46, of Brookhaven.

The eight victims were shot to death between the night of May 27, 2017, and the morning of May 28, 2017, at three locations — Lee Drive, Coopertown Road and East Lincoln Road. Godbolt was arrested by law enforcement near Super Jack’s at East Lincoln Road and Hwy. 84 as he was walking away from the East Lincoln home.

On the video, Godbolt talks about Durr: “He was just there. We was talking about me taking my children and her sister and auntie called the police. I was having a conversation with her stepdaddy and her mama and her, my wife, about me taking my children home. And somebody called the officer. People that didn’t even live at the house, ’cause that’s what they do, they intervene. That cost him his life. I’m sorry.”

Eighteen witnesses were called over the two days including more than a dozen law enforcement officers from various agencies. Many of those testified that Godbolt continued to talk from the time he was handcuffed until he was placed into an ambulance.

“You’ve got one requirement in this life and that’s to love,” Godbolt says to officers subduing him.

“Jesus be with my soul,” he said, after he’s read his Miranda rights. “I love my wife. I love my kids. They would not let me live and let live.”

He showed little to no emotion while watching the videos, but his demeanor changed during “comfort breaks” Thursday. He laughed with his attorneys and interns with the state Office of Public Defender during the 10-minute breaks.

Strong ruled Friday that he would allow all statements the defense sought to suppress to be heard during the capital trial. He also ruled searches of Godbolt’s car at the Lee Drive crime scene and Goldbolt’s home on Brister Street were within the law.

A DeSoto County jury will be bussed to either Lincoln County or Pike County to hear the case in February. Strong ordered the trial be held in Lincoln County in the circuit courtroom upstairs at the Brookhaven-Lincoln County Government Complex unless he decided it should be moved to Pike County’s courthouse due to limited seating available in Brookhaven.

Prosecutors are seeking the death penalty.

Young mom stabbed as she fought off kidnapper to…