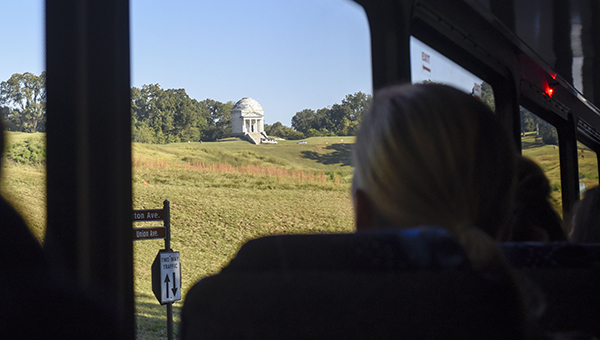 The Illinois Monument is seen through tourists inside of the Vicksburg National Military Park. (Courtland Wells/Vicksburg Post)

The Champion Hill Battlefield site is expanding with the transfer of more than 800 acres of land from the state of Mississippi, the largest expansion of the Vicksburg National Military Park in its history, according to National Park Service.

It will create the first of three new units of the park.

The transfer will be made at a 10 a.m. ceremony July 2, at Champion Hill Missionary Baptist Church, 4143 Champion Hill Road, Edwards. The transfer was recently announced by the National Park Service and the Friends of Vicksburg National Military Park and Campaign.

The donation is the second announcement of additional land for the battlefield in June.

On June 12, the Mississippi Department of Archives and History received a $109,806 grant from the National Park Service’s American Battlefield Trust to preserve a section of the Champion Hill Battlefield.

According to information from the National Park Service, the grant will be used to purchase a 58-acre tract of land known as the Cal-Maine Foods Tract.

Archives and History in 2016 received a $668,926 American Battlefield Protection grant that allowed it to partner with the nonprofit Civil War Trust to purchase about 316 acres of property considered important to the long-term preservation of the site.

Champion Hill was the site of the pivotal battle of the Civil War Campaign for Vicksburg.

On May 16, 1863, about 32,000 advancing Union soldiers met 23,000 Confederates in a fierce struggle for a crossroads roughly halfway between Vicksburg and Jackson.

The field was dominated by a bald hill on land owned by the Champion family, from which Confederate artillery opened fire on the Union army at 9:45 a.m.

The battle ended when the Confederate forces were crushed and forced to retreat to Vicksburg.

The retreat led to the siege of Vicksburg.

Champion Hill Missionary Baptist Church is located on what was the front yard of the Champion Plantation, which served as Grant’s headquarters and as a field hospital.

The property was later donated by the Champion family to the black community for a church.

One person injured as police fire on car that…