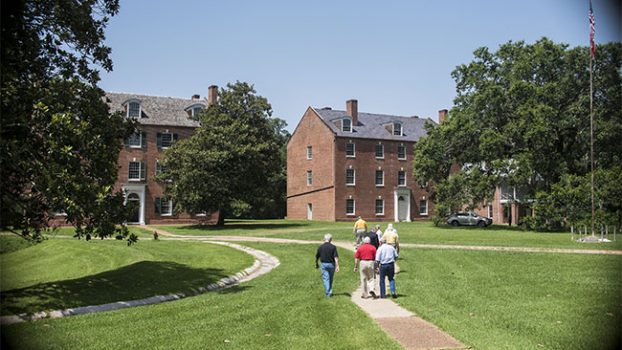 Approximately 20 alumni, former cadets and friends of Historic Jefferson College gathered in one of the campus dormitories Thursday afternoon to discuss the future of the former military prep school.

The campus will be closed to visitors as of 5 p.m. Sunday, said Lynwood Easterling, an alumnus of the school.

The school was chartered as a college in 1803 before it evolved into a military high school during the Civil War. The site ceased to be a school in 1964 and the Mississippi Department of Archives and History acquired the property in 1971. Six years later, MDAH opened the property to the public as a museum and hiking grounds.

MDAH Director Katie Blount said the department plans to make Jefferson College the gateway to Natchez for visitors traveling to the area and to restore many of the outdated buildings on the site.

Starting July 1, the site would temporarily close and would no longer be open daily, Blount said, but will continue to be accessible by appointment only while popular events such as the Great Big Yam Potatoes Old-Time Gathering and Fiddle Contest in May and the Black and Blue Living History Program in October will continue to be hosted on the site.

Blount said she could not comment on how the changes at Jefferson College would affect the current staff.

However, after most of the current staffers lost their jobs at the site, most of the people gathered Thursday viewed the future of Jefferson College with uncertainty with no one present to keep the grounds.

“These people have lost their jobs,” Easterling said. “Call it whatever you like, they got fired.”

Kay McNeil, who worked as a historian at the college for the past 12 years, said the closure would not steal her connection to the college.

“All of us gathered here have a connection with this place,” McNeil said. “It’s important to us no matter when we first came here. We have memories here and memories are something that can never be taken away from us.”

Al Jordan, who attended the school from 1961 to 1964, said he could remember crossing a wooden bridge that used to stand over the gorge on the campus to get to his dormitories.

“A lot has changed since then,” he said.

After the brief meeting and a salute to the past alumni and cadets by a bugler from the Mississippi National Guard, the group gathered around the flagpole on the campus to lower its colors for what they hoped would not be the last time.