Trio of long-term lawmakers to retire Monday after serving more than 100 years, combined 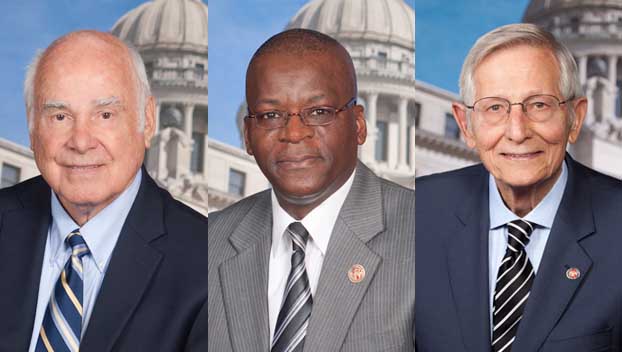 Three Mississippi lawmakers are retiring as of Monday, when the new state budget year begins.

Republican Sen. Tommy Gollott of Biloxi, Democrat Sen. Bob Dearing of Natchez and Democratic Rep. David Myers of McComb are leaving six months before the end of the four-year term. They had already said they wouldn’t seek re-election this year, and their seats will be filled in the November election.

Gollott, 83, is the longest-serving state lawmaker in Mississippi history. He has been in the Legislature since January 1968, with the first 10 years in the House and the rest in the Senate. He was first elected as a Democrat and became a Republican in 2007.

Myers, 57, has served in the House since 1996. He was deployed on active-duty military service for about two years, returning recently.

With these retirements, three of the 52 Senate seats and two of the 122 House seats will be vacant.

Republican Cory Wilson of Madison left the House in February to take a nonpartisan position as a state Court of Appeals judge, and Republican Videt Carmichael of Meridian left the Senate in April to serve on the Mississippi Community College Board.

Republican Gov. Phil Bryant will not set special elections to fill any of the five seats, and the vacancies may have little practical impact. Legislators will return to the Capitol only if Bryant calls a special session before January.

Myers did not immediately return a message left at his home phone number.

Gollott said Friday that he is retiring early because he and his wife are both having health problems.

“I’ve enjoyed taking care of my people,” he said. “Now, I need to take care of my wife and myself.”

Thursday at the Capitol, Gollott said one of his most “formidable” accomplishments was pushing to legalize gambling in the early 1990s, after illegal gambling had long been a reality on the Gulf Coast.

“The state is that much richer for it,” Gollott said, noting that state revenues increased when casinos developed along the coast and the Mississippi River.

Dearing said he’s retiring early because the regular legislative session is over and he does not expect a special session.

Dearing wrote legislation in the 1990s that made retirement income exempt from state income tax. He cited that as a top accomplishment, along with two other landmark pieces of legislation he supported — the 1987 highway act and the legalization of gambling, which led to thousands of jobs in casinos.

The 1987 act included the widening of U.S. Highways 61 and 84, both vital to Natchez. “That was very, very important for safety,” Dearing said.

“The only thing a bureaucrat fears is a well-informed legislator,” McMahan said.

Democratic Sen. John Horhn of Jackson said the Senate is losing decades of institutional knowledge. Speaking of his retiring colleagues, Horhn said: “They were fierce protectors of the rules of the institution and were great promoters of a collegial attitude among members.”