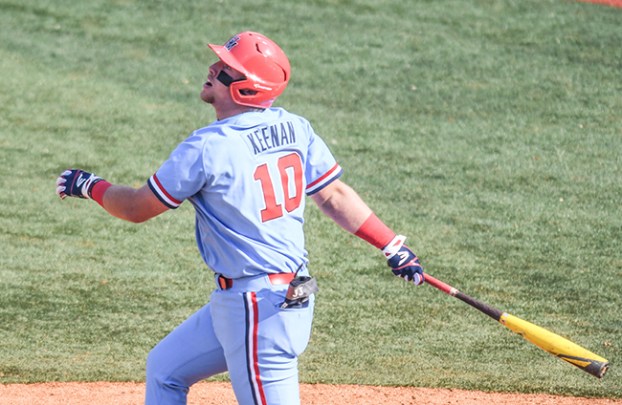 The Rebel third baseman finished as the runner-up in this weekend’s College Home Run Derby, officially capping the end of the 2019 Ole Miss baseball campaign. Northern Kentucky’s Griffen Doersching was the only man to top Keenan, out-dueling him 20-15 in the final round of the derby.

In front of more than 16,000 fans at TD Ameritrade Park in Omaha, Neb., Keenan had the best performance of any Rebel in the history of the event.

With his father, Jimmy, pitching, Tyler Keenan led things off with a bang. His very first swing of the evening yielded a 434-foot home run. He would go on to hit 12 home runs in that first round and 13 more in the second round to send himself to a finals showdown with Doersching.

Unfortunately for Keenan and the Rebels, simply no one could stop Doersching all night. The Northern Kentucky junior hit the 51 homers, putting up the single most of any competitor in every given round. In the finals, he hit 20 home runs, while Keenan went for his round-best 15.

The 40 home-run mark and runner-up finish is the most of any Rebel to have competed in the event. Three others, Thomas Dillard in 2018, Coby Bortles in 2016 and Sikes Orvis in 2014, were unable to reach the mark Keenan did this weekend.

Keenan hit .285 with seven doubles and a team-high 15 home runs in the 2019 season. He’ll be spending the summer in the Cape Cod League with the Harwich Mariners, preparing for what Ole Miss may need to be a big junior campaign.

For the rising junior, Keenan will be relied on relatively heavily next season in the heart of the Ole Miss lineup. The Rebels lost power bats Thomas Dillard and Cole Zabowski, as well as high-average guys in Ryan Olenek and Grae Kessinger, to either pro-ball or graduation.

A hot June on the recruiting front continues for Ole Miss football and Matt Luke. The Rebels landed a commitment... read more