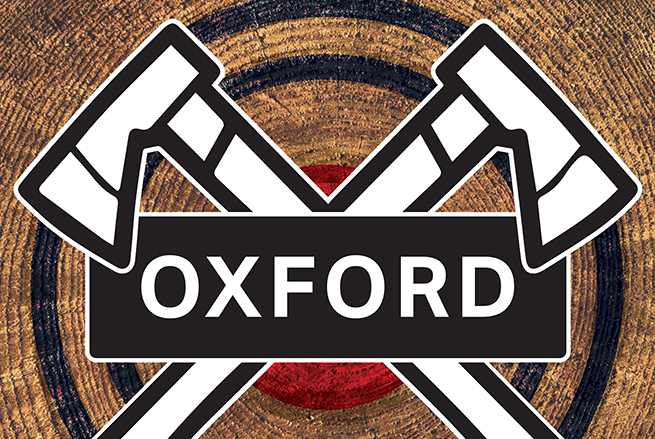 Anyone who has ever wanted to grab a group of friends and spend an evening hurling axes towards a target is soon to be in luck.

Civil Axe Throwing is opening Oxford’s first axe throwing venue next month. It will be the second venue in North Mississippi after one opened in Corinth earlier this year.

The family-owned business opened their first venue in Huntsville, Ala. in 2017 and has other locations in Alabama, Arkansas and Tennessee with five other locations opening soon in Florida, Georgia and Louisiana.

The sport of axe-throwing has been extremely popular in Canada and has slowly seeped its way into the United States.

“I think it’s something that will grow the more people just experience it for themselves,” Scott Brewster, marketing and sales director for Civil Axe Throwing, said. “It it is quite funny to watch and listen and hear people talk about it, especially on social media, because it always starts out, ‘I never thought this was going to be fun or I never knew I could do this.’ …It’s a very progressing sport.”

The venue, which will be located at 3000 Old Taylor Road in front of Faulkner Flats, will consist of four lanes. Similar to renting out lanes at a bowling alley, people in groups can rent hour-long sessions per lane. The groups consist of eight or more and large groups of up to 50 people. It will cost $20 per person.

After testing out Mississippi with their venue in Corinth, Civil Axe Throwing decided to open another one in a slightly larger market and Oxford fit what the company was looking for.

“Oxford really is a great market for us,” Brewster said. “I think obviously being near the university, that’s another aspect of what we’re trying to develop as well. We want to start young with a young demographic and an affluent demographic as well. Oxford is a perfect situation for us.”

Another aspect of the venue is the ability for people to supply their own drinks and some of the other locations work with local bars and restaurants to provide food and beverage options. The mixture of alcohol and axes, which the websites states are dulled blades, is an atmosphere that has worked hand-in-hand at other locations without issue.

The company also has an “Axe-pert” assigned to each lane to help coach and make sure proper safety measures are being followed.

“I know it’s funny when you start to think of those two elements put together in the same room with a large amount of people, but we have not had any issue in almost two years now being established,” Brewster said. “The other component to this is, you’re active. It is a workout. …You’re going to get a sweat going and you’re arm is going to get a little tired. You’re kind of burning (the alcohol) off.”

To participate in the venue people must be 14 years of age or older. There is not a required dress code beyond everyone in the group must wear closed-toe shoes. The venue will provide all the necessary equipment but people can bring in their own axes or other throwing items, but double-bladed axes are not allowed.

For more information can be found at civilaxethrowing.com.