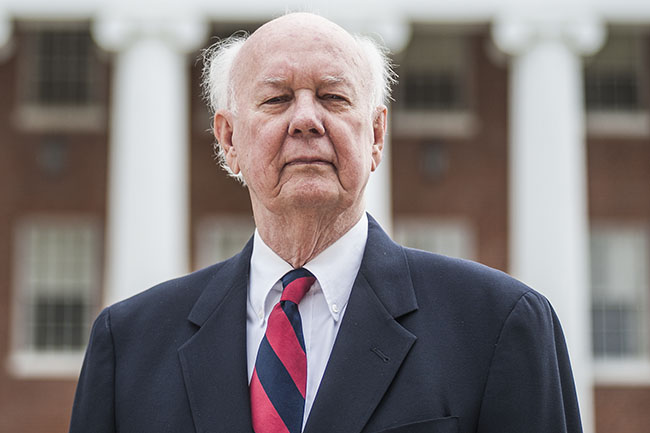 David G. Sansing, professor emeritus of history at the University of Mississippi and author of the definitive history of the university, died Saturday (July 6) in a Memphis hospital one day after suffering a fall at his Oxford home. He was 86.

A beloved historian, writer and teacher, Sansing spent his career shining an honest spotlight on the complicated history of his home state through great writing and heartfelt stories. His writing and teaching have touched hundreds of thousands of Mississippi students over several decades.

“We are deeply saddened by the loss of David Sansing,” said Noel Wilkin, provost and executive vice chancellor for academic affairs. “He was an outstanding university citizen who made substantial contributions to our institution.

“It is a sad day for the entire university community, and he will be greatly missed.”

Sansing published dozens of scholarly papers and authored more than a dozen books and textbooks on various aspects of Mississippi history, including “The University of Mississippi: A Sesquicentennial History,” “Making Haste Slowly: The Troubled History of Higher Education in Mississippi” and “Mississippi Governors: Soldiers, Statesmen, Scholars and Scoundrels.”

His last book, “The Other Mississippi: A State in Conflict with Itself,” was published in 2018 as a compilation of articles, essays, speeches and lectures given throughout Sansing’s career. His 2013 textbook, “A Place Called Mississippi,” remains in use in public and private high schools throughout the state.

“David Sansing was my professor and friend for 50 years,” U.S. Sen. Roger Wicker tweeted Sunday. “Remembered me as a far better student than I actually was – What a loss for Mississippi!”

A native of Greenville, Sansing credited his 11th-grade history teacher, Nell Thomas, also of his hometown, with instilling in him a love of history. After serving in the U.S. Army during the Korean War, he earned both a Bachelor of Arts and Master of Arts in history from Mississippi College and a doctorate in history from the University of Southern Mississippi.

Sansing began teaching history at Ole Miss in 1970. In 1990, he was named the university’s Teacher of the Year.

All eight of Sansing’s children and grandchildren earned degrees from UM.

A memorial service for Sansing is set for 4 p.m. Wednesday (July 10) at Paris-Yates Chapel on the university campus.

This article was written by the University of Mississippi’s communications staff.