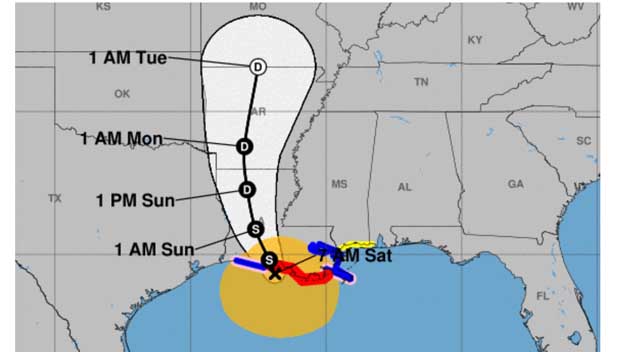 Tropical Storm Barry continues to creep toward the Louisiana coast and its slow movement is allowing it to strengthen, as forecasters expected.

Barry’s maximum sustained winds are now reportedly at 70 mph, just shy of the 74 mph required to be a Category 1 hurricane.

The storm is moving toward the northwest near 5 mph.

Forecasters expect Barry will make landfall in the next several hours and is expected to then move on a more northerly track, up the Mississippi River valley.

Tropical-storm-force winds extend outward from the storm’s center up to 175 miles.

The latest forecasts indicate Barry’s track has shifted slightly to the west, which lowers anticipated rain levels for extreme eastern areas of Mississippi. Southwest Mississippi, including areas around Natchez, Brookhaven and McComb are in line to receive between 6 and 15 inches of rainfall over the next three days.