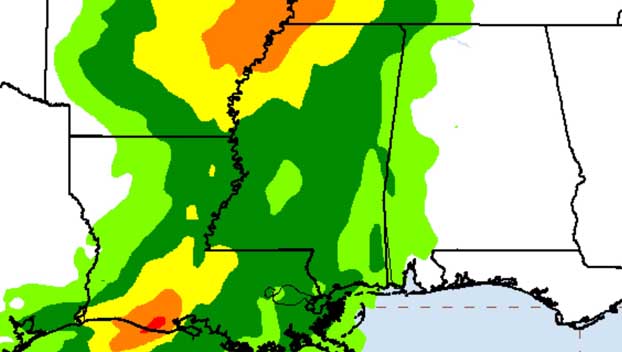 While Hurricane/Tropical Storm Barry certainly caused significant effects for some along coastal Louisiana and in pockets elsewhere, suffice to say — at least so far — the widespread drenching of inland areas forecast hasn’t materialized.

If you’re like us, you kept watching your phones most of Saturday waiting for the deluge to begin, only to notice, the arrival time would come and go with no rain, then a new time would be forecast and the cycle repeated.

So how did that happen? How did the forecasts of 20+ inches wind up (again, so far) wind up so wrong?

The short answer is: forecasters depended on flawed computer models that missed a key factor resulting in rainfall predictions that were nearly biblical in nature — 15, 20, 25 inches of rainfall.

Apparently the same dry air mass over the land where Barry was approaching — the very dry air meteorologists pointed to as a reason why the storm never really was able to develop a traditional fully circular, cyclone look on satellite and radar imagery — kept the storm at bay as it approached land.

“Dry air (the same that held Barry from blossoming into a potent ‘cane), also made it difficult for the tropical air mass to penetrate inland through today,” wrote Dr. Josh Eachus, chief meteorologist at WBRZ-TV in Baton Rouge, Louisiana, on social media. “Models and guidance clearly did not handle this feature well per the initial 10-20″ rain forecasts.”

So they collectively missed it. That’s OK and it’s better to be safe than sorry in such potentially disastrous situations. Much of Mississippi remains at risk of flash flooding today as Barry’s feeder bands slowly grind north so please be weather aware and don’t let the misleading cry of “20 inches of rain coming” make you jaded for the next forecast.

Heavy rains and gusty winds knocked out power on the Gulf Coast as a strengthening Tropical Storm Barry churned a... read more