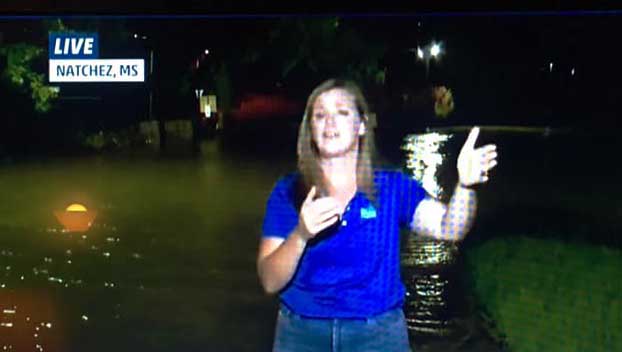 Sharp-eyed TV watchers in Natchez, Mississippi, called “foul” Saturday after a correspondent for The Weather Channel’s live remotes from the city seemed to imply something that wasn’t true.

Correspondent Kelli O’Hara setup at Natchez Under-the-Hill, a historic area of the city that’s directly on the Mississippi River and serves as a dock for river-going vessels such as the luxury riverboats that drop passengers in Natchez.

Anyone remotely familiar with Natchez and seasonal flooding of the Mississippi River realizes it’s not uncommon for Silver Street, the road that runs along the Natchez Under-the-Hill area, to be closed due to high river levels.

Social media commenters Saturday night quickly pointed out that O’Hara’s live location (with a flooded Silver Street over her shoulder) and her on-air comments would likely cause viewers unfamiliar with Natchez to believe the flooded roadway was a victim of Tropical Storm Barry and that the entire city was being affected by flooding.

Silver Street has been underwater since January, when the unprecedentedly high and long seasonal flooding began.

O’Hara’s online profile on LinkedIn touts her experience and integrity.

“For more than a decade, I have built a reputation as a determined, compelling, and trustworthy breaking news and investigative reporter. … It’s our duty as journalists to be honest, accurate, and fair, and I believe those are exceptional qualities I exhibit on a daily basis.”

But a group of Natchez residents might disagree with the picture O’Hara painted for a national audience of Natchez. Truthfully, who knows if her misrepresentation was purposeful or by mistake. For all we know someone at a local bar may have been having a little fun with O’Hara and she feel for the bait.

The truth is, while some remote parts of Adams County, the county Natchez is in, the city itself sits on high bluffs, safe and sound from the river.

During Hurricane Katrina, Natchez became inundated with evacuees from areas affected by the storm as the city was dry, had power, supplies, etc.

Residents and local businesses are quick to point out, Natchez is open for business, so please come.

While Hurricane/Tropical Storm Barry certainly caused significant effects for some along coastal Louisiana and in pockets elsewhere, suffice to say... read more