Why do national weather forecasters struggle so much in Mississippi and Louisiana? 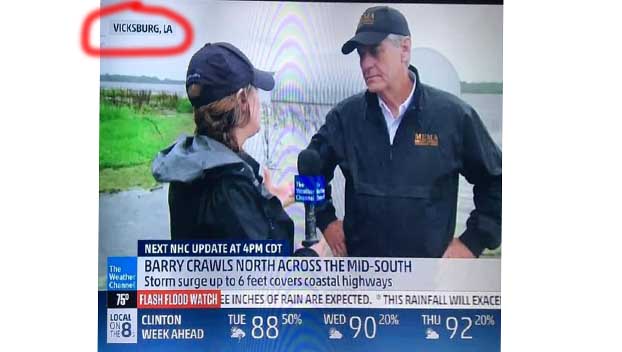 If you’ve spent more than a few minutes on social media lately, you’ve likely come across someone poking fun at the national weather forecasters struggling to wrap their heads around Southern ways, their tongues around our funny-sounding names and their minds around where they are and what’s around them.

The fact is: Being in Mississippi or Louisiana is a little like a moon landing for someone from Boston or New York City.

None of us would think about trekking across the rain forests of the Amazon without a local guide who knows the lay of the land and the local language.

These TV personalities really need to either hire people from the South or hire a guide when they cross into the Deep South.

To their credit, they’re trying to help inform people about what’s going on, but in an effort to be first, to be more interesting and to keep more eyeballs glued to the channel, they seem to be pushing the limits of their own abilities to keep up and the truth.

A viral video showing an on-air personality for The Weather Channel trying to pronounce “Atchafalaya” was viewed more than a million times in less than 24 hours.

Residents in the small town of Natchez in Southwest Mississippi were up in arms Saturday after a TV broadcaster seemed to imply that a road was flooded by Tropical Storm Barry at a time when virtually no significant rainfall has occurred. The more than six-month flood on the Mississippi River was actually to blame and, at least in Natchez, the storm had caused no effect on the river’s level at Natchez.

For someone unfamiliar, it seems as if the city of Natchez was underwater, which is far from the truth as the city sits high on bluffs above the river. If river water flooded downtown Natchez, the water would have already engulfed the entire state of Louisiana and likely much, much more.

And on Sunday for a period of time a TV broadcaster was interviewing Mississippi Governor Phil Bryant in Vicksburg, Mississippi, but the TV screen erroneously labeled the city as “Vicksburg, LA.”

Down in South Louisiana, another reporter apparently wasn’t aware that in low-lying areas that flood people are often buried in above ground vaults. A video showed a scene of a flooded cemetery filled with such vaults while the voice over referenced the sad, tragedy of the floating caskets.

As one social media commenter from Mississippi said, “Bless their hearts.”

Well said. We hope these visitors will come back when they’re not in panic mode and it’s likely they’ll have a good time and likely learn a few things too.

Drive like The King: Three Elvis Presley vehicles up…