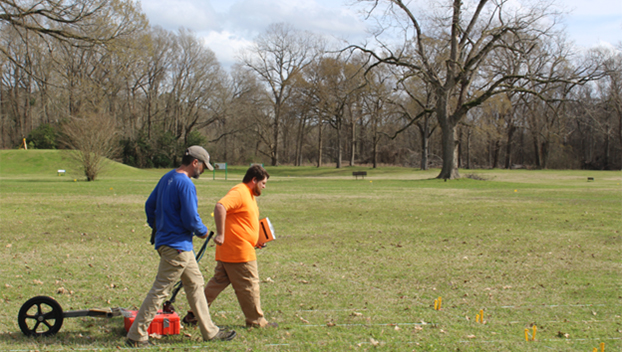 A research team plans to unveil their latest discoveries of a site where Mississippi’s earliest European settlers clashed with a band of Native Americans in among the bloodiest skirmishes in 17th century Mississippi.

In November 1729 the Natchez rebelled against the French colonists, killing more than 200 people in the colony. In retaliation the French colonial militia and their Native American allies captured and occupied the Grand Village in January and February of 1730 and then laid siege to the Natchez, who had taken refuge in two forts they had established downstream on St. Catherine’s Creek. The result of this conflict was the dispersal of Natchez people from their ancestral homeland.

The National Park Service awarded an American Battlefield Protection Program grant to the University of Mississippi Center for Archaeological Research, in collaboration with the Grand Village of the Natchez Indians, to locate, identify and preserve features related to this important battle that affected both the Natchez people and the French colony.

“There has not been any significant archaeological work done at the Grand Village since the early 1970s,” said Grand Village director Lance Harris. “I am looking forward to identifying these features for use in our expansion project and new interpretation of the original Natchez.”

Boudreaux is the director of the Center for Archaeological Research and associate professor of anthropology at the University of Mississippi.

The Grand Village of the Natchez Indians was the main ceremonial mound center of the Natchez people from 1682 until 1730. The 128-acre National Historic Landmark features three mounds, a plaza, nature trail, museum, and store.

Administered by the Mississippi Department of Archives and History, the Grand Village is located at 400 Jefferson Davis Boulevard and is open free of charge to the public from 9 a.m. to 5 p.m. Monday through Saturday and Sundays 1:30 to 5 p.m. Call 601-446-6502 or email info@natchezgrandvillage.com for more information.