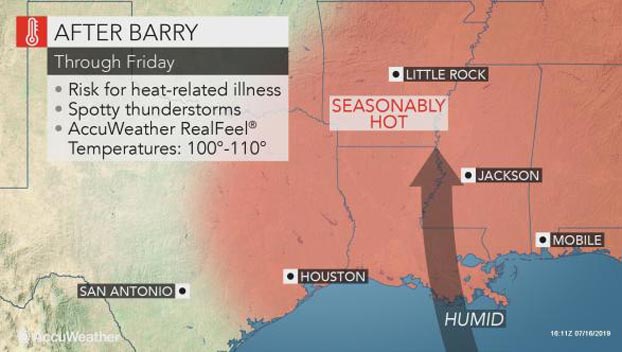 In the wake of Barry’s rain and flooding, a broad area of heat and high humidity will take hold over much of the southern and central United States for the balance of this week.

Barry deposited up to 23.43 inches of rain on Louisiana, delivered over 12 inches of rain in parts of Mississippi and was responsible for extensive urban and low-lying area and coastal flooding, power outages and property damage. Two people lost their lives in rough surf in the Gulf of Mexico related to Barry.

Barry was causing flooding downpours in parts of Arkansas on Tuesday.

It is possible that an old trailing band of moisture leftover from Barry will trigger a few locally heavy storms as far south as the central Gulf coast through Wednesday.

However, most areas are likely to miss the widely separated thunderstorms that pop up in intense southern July sunshine each afternoon and evening from Thursday through Saturday.

While the heat is not uncommon for this part of the nation during the middle of July and in the wake of a tropical storm, it can add to the difficulty of cleanup operations for those dealing with mud, fallen trees and power outages in portions of Louisiana and Mississippi.

“As temperatures climb into the 90s F during the afternoon hours, AccuWeather RealFeel® Temperatures will surge past 100 each day into this weekend,” according to AccuWeather Senior Meteorologist Brett Anderson.

And heat is ramping up across much of the country beyond the southern region, including up into the Northeast.

Even long-time southern residents are urged to take breaks from strenuous physical activity and stay hydrated.

The weather will provide an opportunity to take a break at the beach, but beach goers should still take caution when going for a dip. Seas and surf have diminished over the Gulf of Mexico. However, rip currents are always present due to the ever-changing tides.

There are no signs of any organized tropical systems for the Gulf of Mexico into next week, even though a storm at the jet stream level of the atmosphere may form over the central Gulf coast later this weekend.

However, while similar to the setup that gave birth to Barry, this upper-level storm is likely to be much weaker and therefore much less likely to spin down to the surface.

An uptick in shower and thunderstorm activity is likely over the Deep South due to slightly cooler air aloft associated with the slight southward dip in the jet stream starting on Sunday.