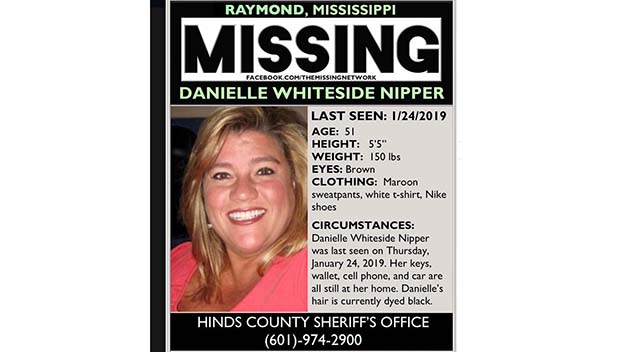 Authorities are looking for clues in the disappearance of Danielle Whiteside Nipper of Raymond.

Nipper was reported missing in January when her family reported she had vanished and left her keys, pocketbook and phone behind.

“I will not get into any specifics or divulge where she was found,” Tannehill wrote.

Tannehill implied Nipper’s disappearance was of her own regard.

“It’s not against the law to disappear,” he said.

Tannehill said she was found in a dirty and potentially malnourished state, wearing some of the same clothes she had on when she disappeared.

“When Danielle is willing to talk, she’ll have quite a story to tell,” Tannehill said. “At this point, she needs to be surrounded by her loved ones without any pressure until she can recover. Her family has been notified, and I ask that everyone please be respectful of the privacy of everyone involved.

“Danielle wanted me to let everybody know she is touched by the number of people who have prayed and shown concern for her.”

Tannehill said God’s hand was at play in her ability to survive after she dropped out of contact with friends and family.

“The main things that helped her survive this ordeal were prayer and the Bible I found with her that she would not leave behind.”