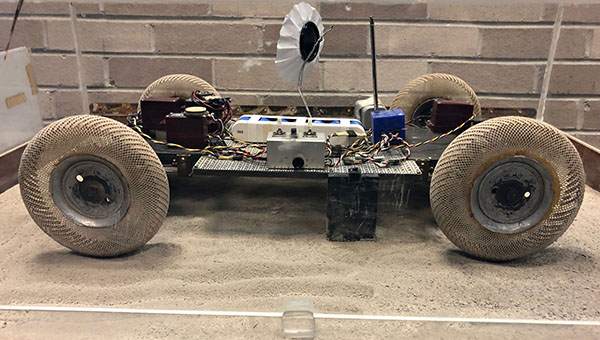 Fifty years ago, Neil Armstrong took man’s first steps on the moon, fulfilling a promise by former President John F. Kennedy to put a man on the moon and return him safely.

But before the Saturn V rocket that sent Armstrong, Buzz Aldrin and Michael Collins on their way to the moon was launched, and before Armstrong took those famous first steps, the U.S. Army Engineer Research and Development Center — known in 1969 as the Waterways Experiment Station — was involved with the Apollo Program.

Waterways’ involvement began with supporting plans to move the rocket to the launch pad at Cape Kennedy and ended with evaluating the wheels for the lunar rover, or “space buggy,” as it was called.

The National Aeronautics and Space Administration used what was called a “crawler transporter,” a massive, 12.6 million-pound tracked vehicle that moved the Saturn rocket from the assembly building to the launch pad at a speed of 1 mph.

The road to the launch pad was, quite literally, paved in Vicksburg.

This time, WES helped develop the vehicle instead of the road.

“They were developing what we commonly call the moon buggy, but traction and wheels were a concern,” Winschel said. “The temperatures on the moon range from 250 degrees during the day, to minus 300 at night. Consequently, regular pneumatic tires that we use on cars and trucks wouldn’t work under such conditions. They had to find some other type of tire and wheel configuration.”

NASA submitted several prototype tires to WES to test traction and driving systems. The tests were conducted between 1969 and 1971, with engineers and scientists using their own version of lunar dust.

“On the Apollo 11 and 12 flights, moon rocks and dust samples were brought back to earth, but not in enough quantity that would allow NASA to send sufficient samples to WES to use in testing the wheels,” Winschel said. “WES evaluated the moon soil and developed a simulated moon soil in large enough quantities to test the wheels.

“It was made of fine dune sand from the desert around Yuma, Ariz., and ground basalt from the Napa Valley in California,” Winschel continued. “When mixed, the ingredients provided the same properties of lunar soil.”

Based on the WES evaluations, a tire developed by Boeing and General Motors made of zinc-covered woven piano wire with titanium strips for traction was selected by NASA. The initial wheels, however, were too large and had to be reduced in size and weight.

The moon buggy made its first tour of the moon during the Apollo 15 mission in July 1971. Astronauts David R. Scott and James B. Irwin drove the 460-pound rover more than 17 miles around the lunar surface, at a speed of 6 to 8 mph.

The Apollo program ended with Apollo 17’s mission — the third to include a rover — in December 1972. No humans have been back since, but ERDC’s work with the space program has continued over the years.

“We’re still very active with the space program,” he said.