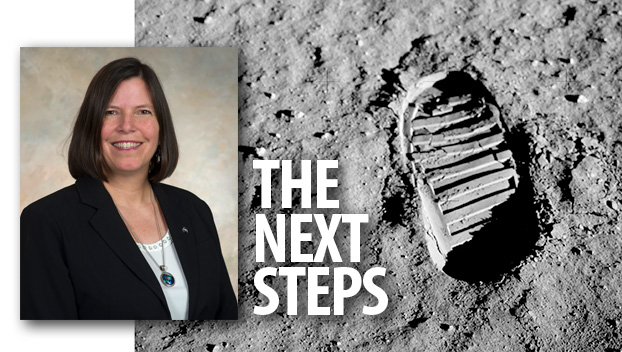 As the world celebrates the 50th anniversary of the July 20, 1969, moon landing, some folks are paying more attention to the achievement than others.

One such person is Cynthia “Tia” Kaiser Ferguson, originally of Natchez, who is employed by NASA in Huntsville, Alabama, where she is director of the space systems department.

“We are working on the Artemis Program,” Ferguson said. “I’m responsible for the software and avionics of the SLS (Space Launch System) vehicle, and we have some people supporting the human lander effort and the gateway effort.”

The Artemis Program is working to send the first woman and the next man to the moon and to put boots on the moon by 2024.

The Artemis Program is the start of a grander plan to colonize the moon and eventually send humans to Mars.

Ferguson said she has been inspired by recent 50th-anniversary celebration events.

“The celebration this week has been really exciting,” Ferguson said on Friday. “I’ve been watching all of the programs on TV and participating in some of the activities around the Huntsville area, and it is really exciting to have this celebration going on at the same time that we are gearing up to go back to the moon.”

Ferguson, who was born in 1967, said she was too young to remember the original moon landing, but she was inspired to join NASA when the Challenger space shuttle exploded after liftoff in 1986.

“The Challenger accident happened when I was in college,” said Ferguson who graduated from Trinity High School and was attending Tulane University at the time. “I was getting my mechanical engineering degree, and I wanted to go help NASA achieve their mission.”

As for the Artemis program, Ferguson said NASA employees are not only finding inspiration in celebrating the anniversary of the moon landing but also are learning from the Apollo era work.

“We still go back and study (the original work),” Ferguson said. “As a matter of fact, it was a few years ago I was part of a team that went to the Smithsonian to look at the Eagle lander, the flight hardware to study the landing legs to see how they designed their mechanisms to touchdown on the moon. That was a really interesting trip, and the Smithsonian folks actually peeled back some of the thermal insulation so we could see some of the mechanisms, because we weren’t able to find the old drawings for that.”

“One of the things that has impacted me this week is watching when the astronauts who came back from the moon did a world tour and how everybody around the whole world said, ‘We did it,’” Ferguson said. “It was a humanity event, not just a United States event.”

“We are going to colonize the moon,” Ferguson said. “We are going to take people to Mars, and it is for all of humanity. It is not just for the United States. Of course, it will be a great accomplishment. We will do it in partnerships with many other nations this time, but it is just such a great program to be a part of.”

Also, as with the Apollo era, Ferguson said the world would benefit economically and technologically from the work being put into the Artemis Program.

“I believe in the Apollo Age … for every dollar the United States invested in the Apollo Program the economy received $7 in return through the technologies that were developed like the computer, diapers and all these different things that came out of developing an Apollo program,” Ferguson said. “We are going to see similar economic benefits through our efforts going to the moon and Mars.”