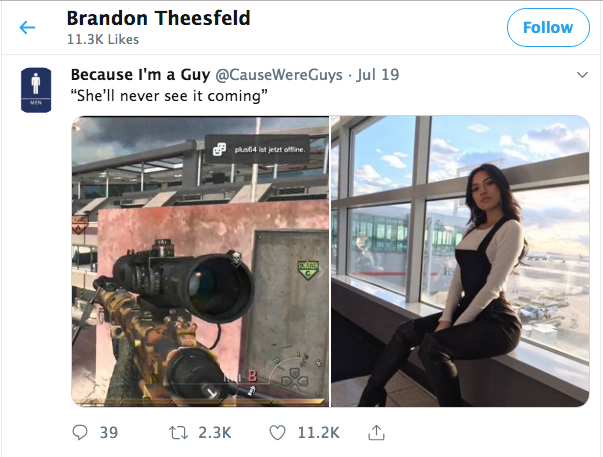 Brandon Theesfeld, the 22-year-old University of Mississippi student charged with the murder of Alexandria ‘Ally’ Kostial, 21, exhibited what could be deemed troubling behavior online in the hours surrounding Kostial’s death and the discovery of her body near Buford Ridge in Harmontown, Miss.

Theesfeld was very active on the social media platform Twitter, and a series of “likes” and retweets on the site could be seen as red flags in light of recent events.

As of Wednesday afternoon, Theesfeld’s account had been deactivated, but The Oxford Eagle newspaper obtained screenshots prior to deletion.

On July 17, three days before Kostial’s body was found by Lafayette County Sheriff’s Deputies during routine patrol on July 20 at 10:23 a.m., Theesfeld “liked” a tweet that read the following:
“if i had a girlfriend i would not let anyone kill her,” the tweet read.

On July 19 at 11:14 p.m., minutes before the crime was allegedly committed, Theesfeld liked a tweet from the account @CauseWereGuys. The tweet included two photos: one was a screen-grab of the video game “Call of Duty,” looking through the scope of a rifle, and the other was of a woman sitting in front of a window.

The tweet was captioned, “She’ll never see it coming.” 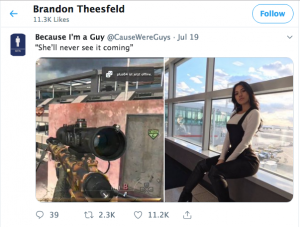 According to multiple reports, Kostial was last seen sometime after midnight on July 19.

At 7:34 p.m. on July 20, approximately nine hours after Kostial’s body was found and news of her death started circulating, Theesfeld tweeted the following:

“You dropped a bomb on me, my number 1 pick for groovy song of the summer.”

It is not yet clear the nature of the relationship, if any, between Theesfeld and Kostial. However, based on photos recovered from Kostial’s account on the photography app VSCO, Theesfeld accompanied Kostial to social functions on more than one occasion.