Emmitt Till group aims to end vandalism with bulletproof sign 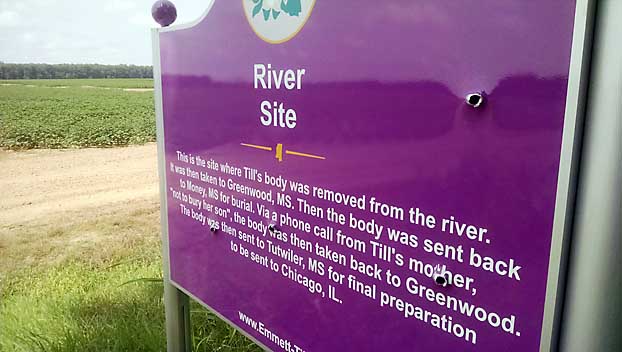 A Mississippi non-profit says it plans to overcome repeated abuse of a memorial to a civil rights era icon by making a new monument bulletproof.

The move comes after an image of three college students surfaced last week posing with guns in front of a bullet-ridden sign that commemorates the site where Emmett Till’s body was recovered from the Tallahatchie River.

Till, a 14-year-old boy at the time of his death, was tortured and murder in 1955 for allegedly whistling at a white woman. Till was black. An all-white, all-male jury acquitted the two men accused of killing Till.

The monument was erected more than 10 years ago by the Emmett Till Memorial Commission.

“The efforts of the Commission have been severely hampered by vandalism,” the group reported in a press release last week. “Our signs and ones like them have been stolen, thrown in the river, replaced, shot, replaced again, shot again, defaced with acid and have had KKK spray painted on them.

“The vandalism has been targeted and it has been persistent. Occasionally, the national news has picked up the story. More often, these acts have gone unnoticed and been the responsibility of our community to maintain.

The commission said it will install a fourth sign at the site where Till’s body was found — called Graball Landy – after the first three signs were vandalized.

“The Commission is installing a fourth sign at Graball Landing—a bullet proof sign. Unlike the first three signs, this sign calls attention to the vandalism itself,” the group’s news release reads. “We believe it is important to keep a sign at this historic site, but we don’t want to hide the legacy of racism by constantly replacing broken signs. The commission hopes this sign will endure, and that it will continue to spark conversations about Till, history, and racial justice.

In addition, the group is seeking for the site to come under federal protection as part of the National Park Serivce.

“In 1955 the federal government refused to get involved in the Till case,” the group’s statement reads. “We believe it is now the responsibility of Congress and the President to ensure this story is told for generations to come.”

Mississippi State stabbing suspect turns himself in to police