Judge gives death row inmate new trial; inmate asks him not to, citing concern for victim’s family, his own 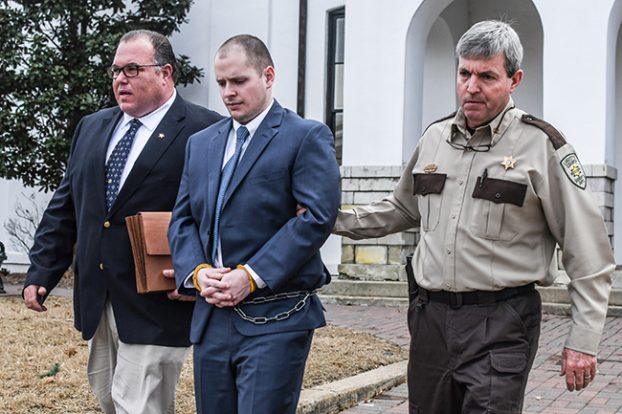 Steven “Matt” Wilbanks, foreground, escorted by Lafayette County chief investigator Alan Wilburn, left, and chief deputy Scott Mills, leaves the Lafayette County Courthouse in Oxford, Miss. on Thursday, February 15, 2018. Wilbanks, who was found guilty of capital murder for the 2013 shooting death of Zacharias Hercules McClendon on Tuesday, was sentenced to the death penalty on Thursday. On March 27, 2019 Judge Andrew Howorth granted the order of a new trial for Wilbanks following two potential errors with the jury.

Due to a potentially tainted juror, a former Ole Miss student who was convicted of a 2013 murder has been granted a new trial.

Steven Wilbanks was convicted in the murder of Zacharias Hercules McClendon, who was shot to death in 2013. Wilbanks was given the death penalty and had been sitting on death row. Circuit Court Judge Andrew Howorth granted the motion for a new trial on March 27 of this year.

On the night of Dec. 17, 2013 McClendon was shot in the back of his head while doing dishes. Joseph Lyons and Derrick Boone accompanied Wilbanks, who entered McClendon’s apartment on County Road 140. During the trial in 2018, Wilbanks testified that his plan was to kill McClendon to steal his money, credit cards and other items. After a four-hour deliberation, a jury found Wilbanks guilty of capital murder in February 2018.

McClendon was a graduate student at Ole Miss and was pursuing a Master’s of Business Administration.

Lyons and Boone pleaded guilty in order to have the death penalty removed from their potential sentencing. The two were subsequently sentenced to life without parole.

The motion, which was filed by Wilbanks’ attorney, referenced two problems in the protocol that took place during the trial. The first problem stated there was an error in the jury instruction process. The court’s Instruction No. C-1-S, in subpart C, incorrectly referred to subpart of the instruction B on two occasions instead of just one, the motion stated. In the first instance the instructions should have referred the jury to subpart A.

“As a result of one misplaced letter, the jury in its verdict, made findings related to aggravating circumstances twice, and never made the required findings of all facts that they believed existed beyond a reasonable doubt at the time of the commission of the capital murder,” the motion read. “The instruction was flawed. The jury properly followed the instruction. Consequently, the verdict was flawed.”

The second problem had to do with the jury selection process. One of the prospective jurors was an Oxford Police officer and admitted as much when the panel was asked by the court whether any of them had any prior knowledge about the case. The OPD officer indicated he did and his information had come by virtue of working on the police force and he could not be fair or impartial.

The court attempted to undo any potential tainting of the jury pool, but did deny a motion for a mistrial. The motion continues to claim that a discussion with another juror at the bench implied that others may have been affected by the statement made by the OPD officer.

“What may be a harmless error in a case with less at stake becomes reversible error when the penalty is death,” Howorth wrote in the order, referencing the 2007 trial of Lynch v. State.

The day after Howorth ordered a new trial, Wilbanks sent him a hand-written letter requesting he return to death row in Parchman Penitentiary and suggesting he did not want to seek a new trial. In the letter, Wilbanks said he asked his attorney to allow him to speak up and that Howorth allowed Wilbanks and his attorney to speak in a conference room. Once the two spoke, Wilbanks claims in his letter that his attorney informed him Howorth would not be coming back out and the hearing was over. Wilbanks never got to speak to Howorth.

“I never wanted to contest the verdict at the JNOV hearing. In fact, I requested my attorney waive the hearing altogether, but he refused,” Wilbanks’ letter read. “Again, I do not desire to contest the verdict at this time, as I do not wish to put the McClendon family, my family or the state of Mississippi through another painful, debilitating trial. I would rather go back to Death Row.”